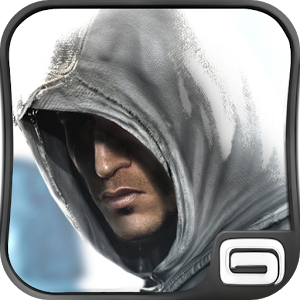 Assassin’s Creed is a side-scroller game based on the console game of the same name. Caution: Violence - the object of the game is assassination

This review of Assassin’s Creed was completed by the Australian Council on Children and the Media (ACCM) on 25 January 2015.

This review of Assassin’s Creed contains the following information:

Assassin’s Creed is a two-dimensional side-scroller that follows the story of an assassin named Altair. The objective of the game is to navigate through a range of levels whilst killing enemies, avoiding obstacles and collecting items. The skills required to play include motor skills, reaction time skills and problem-solving.

When the app is installed and opened, players are presented with a small menu containing the options of ‘Play’ or view ‘More Games’. After this, players may elect to start a New Game or choose an individual level to play through. The game also requires players choose a difficulty setting, selecting from Easy, Medium or Hard.

Players are then presented with a screen of scrolling text that informs them of the following: ‘Altair, an assassin, was stripped of his rank and his possessions and forced to flee in disgrace because he failed an important mission due to his arrogance and over-confidence. However, Sinan, Master of the Assassins, presents him with a list of eight men, each bound together by a desire to intensify and exploit the third crusade. Sinan explains that if Altair kills these men, his status will be restored, and his famous failure will be forgiven as well. Thus begins Altair’s journey as an assassin.’

After this, players are given their first mission: it takes place in the city of Acre, in the time A.D. 1189, and their target is Sibrand. Players are taken to a 2D side-scroller where Altair stands on top of a building on the left-hand side of the screen. There is a control panel on the left with arrows pointing up, down, left and right – these controls may be tapped in order to move Altair through the side-scroller and past obstacles. It is possible for Altair to run up or down ladders, kick them away in order to close gaps, as well as swing or shimmy between areas that cannot be walked through. There are horses that Altair can mount and ride in order to increase his speed and range of motion, as well as ropes hanging from the ceiling that he may swing on. There is also a button that contains the Assassin’s symbol, which enables players to slice barrels in order to obtain the objects inside them.  Players can collect power-ups (such as Memory Blocks) as well as items to restore their health. When Altair meets enemies, he may kill them with his sword or other weapon – small amounts of blood can be seen.

As players progress through the game, other weapons can be obtained (such as cross bows) that are more powerful. It is also possible to learn new attacks, such as a parry command or the ability to jump off a guard’s shield in order to stealthily kill them.

The object of the game is assassination