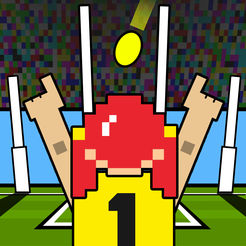 Aussie Rules Hero is a continuous goal kicking game. Players need good timing to play. Caution: Not recommended for 12 years and under and parental guidance from 13 + due to in-app purchases, gambling related advertising and social media connectivity.

This review of Aussie Rules Hero - Footy Goal Kicking Game was completed by the Australian Council on Children and the Media (ACCM) on 16 April 2018.

This game was played for several days by the reviewer.

This game is based on AFL style goal kicking. Players can choose and customise their avatar to reflect their favourite team, choose their number and play as either male or female. Players kick for goal by simply tapping anywhere on the screen. A white arrow moves back and forth in front of the goals to indicate aim and the wind factor is indicated by the direction (left or right) and by number strength. There are a number of game modes which include practice, 30 seconds, mad minute and long bombs etc. The aim of the game is to get as many goals as possible within the noted time frame. Players only need good timing and estimating of wind strength (which only improves with practice).

Aussie Rules Hero is very cartoonish graphically and would appeal to many young children. As you only need to tap the screen to kick for goal, it’s also very easy to play. If it weren’t for the ads, I’d agree with the developer’s recommended age of 4. However, most ads in this game featured gambling – and some were very realistic slot machine games that mimic the actual sounds you would hear playing real ones. These ads were also the ones that you can’t opt out of until the 30 second time frame – hence making the player watch or wait until they can play again. This game also easily connects to Facebook and Twitter – in some cases it prompts this to post good achievements.

Players can remove all ads for $2.99. Different avatars can also be purchased for $4.49.

There is no gambling within this game but please see notes in reviewers comments re ads for gambling apps.

Most ads in this game featured gambling – and some were very realistic slot machine games that mimic the actual sounds you would hear playing real ones. These ads were also the ones that you can’t opt out of until the 30 second time frame – hence making the player watch or wait until they can play again.

Players can also watch ads if they want extra time within a game or to play bonus games.

Players can choose to be either male or female.