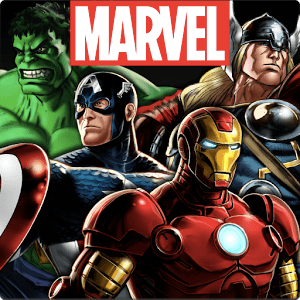 This review of Avengers Alliance was completed by the Australian Council on Children and the Media (ACCM) on 7 August 2014.

This review of Avengers Alliance contains the following information:

The Avengers Alliance allows players to use famous Marvel Comic characters to engage in turn-based battles with in-game characters. The objective of the game is to unlock as many Marvel heroes as possible, and these characters may in turn be used to increase a player’s ability in battles. There are limited skills needed, but visual and motor skills assist in gameplay.

When the app is first installed, a small pop-up window appears that states ‘This mobile app contains in-app purchases. In-app purchases cost real money and are charged to your account. To disable or adjust the ability to make in-app purchases, adjust your device’.

After this is closed, a character from the Marvel comics known as Nick Fury introduces himself – he says that his mission is to defend the world. He states that training is almost over, and informs players that they are playing as an agent. Players are then given the opportunity to choose either a male or female agent to identify as. They are then informed that they will face a ‘salvaged Sentinel that has been set up to kill you’. Players are brought to a screen that resembles an arena – there is a gun available for them to click on and use at the bottom of the screen, in addition to several that appear to be level locked and unusable at the beginning of the game.  After clicking on the gun that players may use, they are given some basic statistics about it – the Total Damage it can do, the name, the likelihood of obtaining a critical hit as a percentage, and the type of weapon it is. They are also provided with information on the stamina (or health) of the player’s character.

Beginning a battle costs energy; however, energy refills itself over time. During the battle itself, players tap on the enemy character and watch as the agent fires a gun – blood splashes from the enemy robot, although this is still presented in an animated way. The enemy then attempts to hit the agent, after which the player may tap again. The battle is interrupted by a character called Maria, who informs players that SHIELD can provide Supplies that will give them ‘an edge over the toughest enemy’. Players may then open their inventory and use items such as a grenade. After the battle is won, the word ‘Victory’ appears on the screen in bold letters.

The app continues in a similar fashion, with a storyline being woven through and involving situations such as ‘a massive Pulse has hit the planet. Everything is down’. Within the dialogue, a range of famous Marvel characters are presented – these include characters such as Iron Man, the Black Widow, etc. As the story progresses, more Marvel heroes are ‘recruited’ and added to a player’s ‘Hero Collection’ (there are 36 heroes in total). The objective of the game is to continue playing in order to recruit heroes, subsequently building the strongest team possible.

After recruiting more heroes, these characters can be selected to join the player in battle – they will automatically battle enemies that are faced (players can watch this unfold without needing to manually do anything), and can require health kits once their health decreases. Players may choose the type of attack that the heroes utilise, such as ‘Martial Arts Kick’ or the ‘Repulsor Ray’. After battles are won, players often receive a reward (in the form of useful items, such as ‘EMP Prototypes’).

At the bottom of the screen, players also have icons for the following options: Recharge, Inventory, Distress Call (which summons another random hero), and Store. In the store, players are able to purchase new weapons for gold (e.g. the ‘Roar of the North’ Gun). Players may also purchase new uniforms, supplies, resources, as well as in-game gold for real money.  Players level up as they complete more battles and increase their experience points. They also receive gold when they level up. Once a level is complete, players receive mission points in the form of a Total Score, Battle Points, Survival Points, and Number of Heroes Deployed. It is also possible to send heroes on remote missions – this costs the players currency to do, but they may receive rewards for doing so.

This game incorporates in-app purchasing which may encourage children to spend real-life money in a potentially reckless manner. The violence may also pose a risk for younger players, with the app demonstrating bloody wounds in its animated battle scenes and also other characters dying and disappearing once they have been defeated in battles.

There is an ‘Allies’ option within the game, where players may invite and add other players as Allies. They are given a list of players currently online, and may select and request to add them. It is possible to select another player, and choose an item to ‘Send as a gift’ to them.

Although the app functions as an advertisement for the Marvel Comics and feature films involving these characters, there are no external ads that advertise other children’s apps.

Women are presented in quite a sexualized, stereotypical way – they wear tight leather suits, have large breasts and wear a considerable amount of make-up.