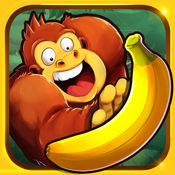 Banana Kong is an endless runner game where ‘Kong’ must outrun an avalanche of bananas to survive. Caution: In-app purchasing, online interactivity and advertising. Suitable for ages 12+ with parental guidance.

This review of Banana Kong was completed by the Australian Council on Children and the Media (ACCM) on 23 July 2017.

This review of Banana Kong contains the following information:

The reviewer played the game for a minimum of 40 minutes.

In this app the main character; ‘Kong’, tries to outrun an avalanche of bananas. Players move through 4 different settings including a jungle, cave, tropical Island, an underwater scene and treetops -completing challenges along the way. Players run, jump, slide and glide their way through each setting, collecting bananas and avoiding obstacles while trying not to die or be swallowed up by the banana avalanche.

During the first game play in the jungle, players are taught how to move Kong to collect bananas, avoid obstacles, and access additional settings (such as the cave or tropical island). There is an option for this tutorial to be present during all game play if chosen. Players are given challenges to complete during game play such as ‘enter the underwater area 10 times’ or ‘perform 5 flower jumps’ and if they are completed receive bonuses. Players are given the option of skipping a challenge but must pay with game currency (bananas) or by watching an advertising video. Players can access the store to purchase items that may improve their game play or to personalise Kong (see In-App purchasing).The game requires quick thinking and the ability to make decisions under pressure so may help players to develop these skills. Players are able to practice simple mathematics when using their in-game currency to purchase items in the store.

Parental guidance is recommended for children 12+ due to the inclusion of advertising, in-app purchasing and the accessibility of downloading other apps from the app store without a password being required. These settings can all be controlled via the phone/iPad settings.

After each game play the player can view a summary of their ‘stats’ and can post their ‘stats’ to twitter via a direct link. The game menu accessed via the home screen also has direct access to Twitter and Facebook. The game is also connected to the Apple Game Centre, which is an online application where users can post and share their scores and achievements. Once downloaded, the app can be played without Internet access. This option disables all in-game advertising and links to social media. This can be managed via the user’s phone settings, as can access to the Apple Game Centre.

At time of review, the reviewer found no simulated gambling content.

The main playing character of the gorilla is depicted as male. This is conveyed through his body shape, movements and sounds. In the game shop players are able to purchase ‘parachutes’ to help their character collect game currency (bananas). One of these parachutes is made from a bra and is called ‘Where’s my Bra?’

No coarse language was observed during the review only animal noises, music and sound effects could be heard.

The app is an endless ‘runner’ game meaning that access points to other screens/levels appear randomly during game play. This could result in play sessions continuing for extended periods of time as players keep playing, hoping to find an access point to enter another screen/level. It is recommended for players to have regular breaks in game play. This could also be an opportunity to discuss appropriate time limits and the need for regular breaks during game play.