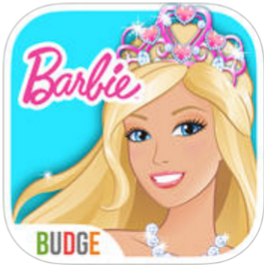 This review of Barbie Magical Fashion- Dress Up was completed by the Australian Council on Children and the Media (ACCM) on 29 May 2016.

This review of Barbie Magical Fashion- Dress Up contains the following information:

The features of this app were reviewed for approximately 40 minutes

Barbie Magical Fashion Dress Up is a themed dress-up app for children. The objective is to customise outfits and backgrounds for various Barbie characters. The skills required are motor skills, comprehension, and listening skills.

When the app is first opened, players are greeted with a full screen image of Barbie in a floor length blue gown, with an advertisement for the app developer in the corner. Once the app opens, players are taken through a basic tutorial, and told about a variety of customisable features on their character, such as hair and makeup, shoes, clothing, and whether to be a human, a unicorn, or a mermaid. Once the tutorial video has ended, players are met with a full-screen ad for another Barbie game by the same developers, which must be manually closed. In the top left hand corner of the screen at all times, there is a “More apps” button, which cannot be removed. Clicking this takes players to a screen where all of the apps created by the developers can be installed. The main screen of the app has players faced with an image of Barbie, who is wearing a basic white dress. This can be changed by tapping various parts of Barbie, and by doing so the players are taken through sections, and encouraged to apply makeup, change hair style, and adjust clothing for Barbie. In the top right hand corner, there is a parents section. Within this, users are asked to enter the year of their birth. This has options such as entering an email address to receive emails from the developer, liking the developer on Facebook, as well as looking through a “parent's album” of created Barbies within the app. The app regularly presents the player with on-screen boxes. Tapping on these initiates a mini game where players can prepare various parts of Barbie’s outfit, hair and makeup. Several of the offered items have a small lock next to their selectable picture, and when tapped, this takes the player to a screen where they can purchase other packs of downloadable content. These packs range in price, either $9.99 for an individual pack, or $22.99 for a pack of all four of the downloadable extras.

At one section in the clothing mini game, the player is taken to a full screen prompt asking if they would like to select wings or a cape for their character. Choosing either will take the player to a section where they must purchase paid content to continue.

At the end of customisation, players can sign their name and save an image of the created princess. Upon completion of a princess, an advertisement appears on screen which must be manually closed. Tapping on the advertisement prompts players to enter numbers into a written word based lock screen before proceeding.

Inappropriate material can be drawn in the “Signature” section of the app without being screened. This cannot be shared online. Within the parents section of the app, players can share created princesses with others through Facebook.

At the top of the main screen, players can tap a button and read the privacy policy of the app.

Yes: Within the app, players can purchase a variety of downloadable content packs. These packs range in price, either $9.99 for an individual pack, or $22.99 for a pack of all four of the downloadable extras.

Ads for various other apps by the same developer appear on almost every screen within this app.