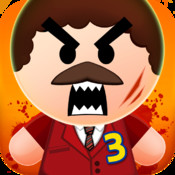 This is an app game in which the player can beat and kill their cartoon boss using a variety of methods. Caution: in-app purchases, online interactivity, advertising, violence, gambling devices

This review of Beat the Boss 3 was completed by the Australian Council on Children and the Media (ACCM) on 11 March 2014.

This review of Beat the Boss 3 contains the following information:

This is an app game in which the player can beat and kill their cartoon boss using a variety of methods.

This cartoon style game begins with the boss yelling at and slapping an employee, who is then given the message that it is time for revenge. The player can throw the boss against the wall, which is accompanied by thuds and “ow!” noises. Bruises appear on the boss. The player is offered “weapon” of a slapping glove and can proceed to slap the boss. Coins are awarded for hits. As coins accumulate, the player can purchase other weapons. An example is rotten food – when the player throws it in the boss's face, he gets cartoon diarrhoea. Another weapon which can be purchased with coins is a cigar – the player can use it to inflict burns on the boss, which is accompanied by singeing noises and smoke. The objective is to keep inflicting injury on the boss, even when he is lying beaten on the ground, until he dies. The player can click on a heart to wake up the boss. Players can purchase or build other weapons, such as a bow and arrow, a nail gun, a spiked bat, swords, a selection of guns and rifles. The boss is able to be customised. The player will be set objectives, for example to kill the boss three times, for which they are rewarded with coins and/or diamonds.

Players can earn free coins by liking the game on Facebook. Players can earn free gems by signing up to Tapjoy.com with either their email address or Facebook and downloading the MyTapjoy app. This app presents offers for players to play games, do surveys and buy products to earn free diamonds.

Players can earn free gems by signing up to Tapjoy.com with either their email address or Facebook and downloading the MyTapjoy app. This app presents offers for players to play games, do surveys and buy products to earn free diamonds.

In this game, the player inflicts a great deal of premeditated, prolonged cartoon violence. In the first stage, office workers witness the violence through a large window, but most hide behind their desk partitions. From time to time, they come out to cheer, with the exception of one worker who sheds a tear.

Violence and scary material: This game is entirely based on beating up the cartoon boss with a selection of weapons and other objects untill he/she is bruised or otherwise injured and then dies. When the player shoots the boss with their bow and arrow, some blood spurts and the arrow remains sticking out of the boss’s body.

Use of substances: In the Boss Room, a bottle of liquor and a glass stand on a table.