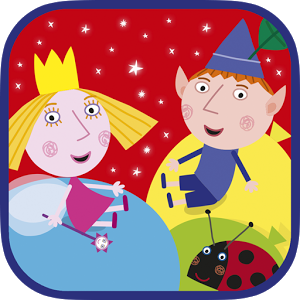 This review of Ben & Holly: Elf & Fairy Party was completed by the Australian Council on Children and the Media (ACCM) on 30 May 2016.

Ben & Holly: Elf & Fairy Party is an interactive children’s activity app. The objective is to complete each of the four activities in order to obtain items for a ‘party bag’. The skills required include motor skills to utilise the functions of the app, as well as good reflexes and visual identification skills.

When the app is first installed and opened, players are taken to a home screen featuring an animated image of a garden party – there is a female fairy (Holly) plus a male elf (Ben), as well as a variety of colourful balloons strung up. There is a Play icon in the centre of the screen. When players click on this, they are taken to a new screen with a voiceover that states ‘Hello, welcome to the party. Come and join in! Play lots of party games. Choose a game’. Players are presented with four icons to click on, each with different images to represent the game (e.g. one contains a range of balloons, another contains musical instruments, etc).

Upon clicking on the first game option, ‘Design a Gift’, players are asked to ‘Design and choose a gift to take to the party’. They are presented with three different options (a golden horn, magic wand, or king’s crown) and must tap on one of the gifts in order to select it. Once a gift is selected, players are asked to choose the shape of their gift. Here, they are able to select from a range of customisation options – the king’s crown represented a hat, and players are able to choose from one of five different hat shapes (e.g. a pirate’s hat, jester hat, a crown, a beanie and a wizard hat). Once players make their choice, they have the option of clicking on an arrow in the top right-hand corner to progress to the next part of the game. Players are then able to choose a colour, as well as a pattern – both of these have five options to choose from once again. After this, players can drag and drop certain stickers onto their item. These stickers are small animated images of things such as flowers, fruit, animals, etc. The game then prompts players to ‘Press the purple button to take a picture of yourself in your hat’. The device’s camera opens, and players are able to take a photograph of themselves. After this, the hat is superimposed onto the image, and players are able to click and drag it to the position they wish it to sit. The game then allows players to select a frame for the photo, after which players are told that they have ‘Added a hat to their party bag’. From here, players are able to finish the activity and move onto another game.

The next game is called ‘Piñata’. Players initially have the option of choosing a piñata in the shape of either a strawberry, or a horse. They are told to ‘swipe and tap the piñata to make treats fall out’. The game encourages players to continue hitting, and small edible treats (such as cookies and cupcakes) fall onto the ground with each tap. The piñata eventually breaks, and players are told that they’ve added another item to their party bag.

‘Balloon Park’ is the third game, and involves tapping the screen as colourful balloons appear in order to pop them. Players are given 30 seconds to tap as many balloons as they can. Balloons which are not popped do not count towards a player’s total tally.

‘The Elf Band Game’ is the fourth game within the app, and entails choosing ‘Five elves to play in the band’. To do this, players must tap on five of eight small icons with images of different elves. They are each holding different instruments (e.g. guitar, saxophone, trumpet, etc). Players are then able to hear the instruments play by tapping the musical notes which fall from the top of the screen.  Players must tap these before they reach the musicians positioned at the bottom, otherwise a loud beeping tone is heard instead of the musical tune. There are also small magical wands which, if not tapped before reaching the musicians, will turn the people into frogs briefly and prevent them from playing. After this, players are able to listen back to the full musical performance, and are able to include flashing lights and falling confetti by pressing one of two buttons. This adds another item to the party bag.

Players are able to continue playing these four same activities, and therefore obtain more items for their party bag. There does not appear to be any inappropriate material within the app – there is no in-app purchasing, or advertisements presented. The app is very basic, and would be suitable for young children.

No: no in app purchasing found during this review.