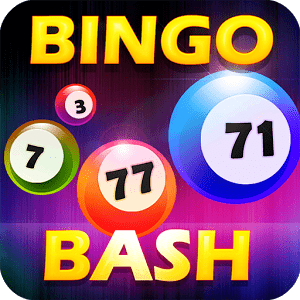 This is a game of chance. It is a real time live multiplayer game.

This review of Bingo Bash – Free Bingo Casino was completed by the Australian Council on Children and the Media (ACCM) on 27 February 2014.

This is a game of chance. It is real time live multiplayer game.

This game is set up as a series of “rooms” – initially only one is unlocked.  The player begins with an allocation of game coins and game chips. When the player enters a “room”, they can select to play from one to four cards. Cards are bought with chips – the cost per card may vary between rooms. Depending on the number of players, a certain number of Bingos for that round is specified. A computer generated voice calls the numbers. If a number on the card is called, the player taps that square. Some squares also contain symbols which will award various bonuses if tapped. Players also accumulate stars which will increase the player’s level. Once a row (or other winning pattern) is complete, the player must tap the Bingo button. As players in the room get Bingo, their names and pictures appear at the side of the screen (these can be set up to be a nickname and cartoon picture, or if the player has logged into Facebook, it is their name and profile picture). Players can use various Powerplays, if available, to increase their chance of winning. When all the available Bingo’s have been claimed, the round is over. More chips are allocated each day. Other rooms are unlocked as the player moves up levels.

A Starter pack can be purchased – this was offered at a “special” price of $1.99. There is a Store where the player can buy chips and coins with real money (US$1.99 to US$99.99) and Powerplays with real money or game coins.

Players can chat live with other players who are in the same virtual “room”.  The player can set up their profile with a nickname and a cartoon character picture. Players are invited to log in with Facebook. When players log into Facebook, the app received their public profile, friend list and email address. Players are offered to connect their device to their FB account, which transfers their balance. After logging in, the player profile is updated with their real name and FB profile picture – it does not seem possible to change it back to a nickname and cartoon picture. Players can send chips to Facebook friends.

Some people would categorise Bingo as a gambling game. There is a wheel of fortune, where the prizes are chips, coins or powerplays – the player receives one free daily spin and then can purchase more for money (3 spins for $0.99).

Some parents may consider Bingo as a gambling game.