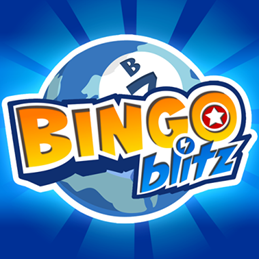 A fast-paced, high action, online version of Bingo. Players can compete with other players from around the world.

This review of Bingo Blitz was completed by the Australian Council on Children and the Media (ACCM) on 2 April 2014.

This review of Bingo Blitz contains the following information:

This is a game of chance that involves multiple players from around the world in real time.

This game is set up with a series of rooms: Plano, New York, Madrid, Sydney and Hong Kong. The latter two rooms are locked until the player reaches level 5. The player is allocated a number of coins and bonus points to begin. The cards are purchased with bonus points – one point each in Plano and New York, two points each in Madrid. A certain number of Bingos for that round is specified depending on the number of players. A computer generated voice calls the numbers. If a number on the card is called, the player clicks that square. Some squares also contain symbols which will award various bonuses if clicked. Once a row (or other winning pattern) is complete, the player must click the Bingo button. As players in the room get Bingo, their names and pictures appear at the side of the screen (these can be set up to be a nickname and cartoon picture, or if the player has logged into Facebook, it is their name and profile picture). Players can use Power Ups which occur after a certain number of squares are called, to increase their chances of winning. When all the available Bingos have been claimed, the round is over. Players are rewarded with various items from collections in the room they are in and keys to unlock treasure chests.

Players can chat live with other players who are in the same virtual “room”.  The player can set up their profile with a nickname and a cartoon character picture. Players are invited to log in with Facebook. When players log into Facebook, the app received their public profile, friend list and email address

Coins, purchased through in app purchases, are gambled during the game. Players are invited to enter the Big Apple slots where spins can be purchased.

Adverts appear during use of app or product placement ads or as images within the app.

Advertising for various games, products and services appear on the right hand side of the screen.

This is a simulated Bingo game where players exchange in app currency to participate.