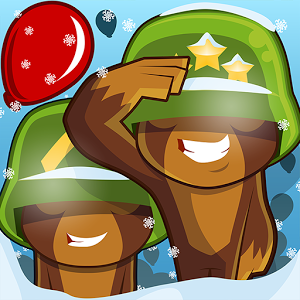 This review of BloonsTD 5 was completed by the Australian Council on Children and the Media (ACCM) on 20 February 2014.

This review of BloonsTD 5 contains the following information:

Bloons TD5 is a game of strategy. The player must set up a series of defences, using monkeys, towers and other devices, in order to destroy the incoming balloons. The aim is to prevent any balloons from successfully travelling through various maps.

The player starts out with some game currency and 200 game lives. The player must purchase defensive equipment with game currency – dart-shooting towers, sniper monkeys, canons etc – and place them strategically on the screen. The aim is to destroy all the balloons, which come onto the screen in a rapid stream. Game currency is awarded for balloons popped. Any balloons which are not destroyed and successfully reach the exit point deduct lives from the player. If the player runs out of lives, they can use Monkey Money to buy more lives. Balloons of different colours have different properties. The various types of defensive equipment have different capabilities. Successfully defended challenges are rewarded with Monkey Money and unlock other maps and different types of shooting equipment to buy. It is possible to upgrade equipment with game currency. The challenges increase in difficulty and the player must set up more elaborate defences. This requires the player to consider the properties of the different coloured balloons and the capabilities and range of the various types of defensive equipment. Players also need to consider the placement of their defences for maximum effectiveness. Players learn by trial and error.

There is a co-operative play mode in which players are randomly assigned an online partner, with whom they must jointly build the defence set up. The players’ first names are displayed if they have signed in to Facebook. It is possible to request game currency from the other player and to give some of your currency to them.

It is possible to buy additional lives and game currency with Monkey Money. Monkey Money can be purchased with real money. Within the game, the player receives messages suggesting they can unlock all the tower upgrades by buying them with real money. The process to make a purchase requires moving through 3 screens before entering either card/debit card details or gift card number. Where GooglePlay credit already exists, the Google Account password is requested. Parents should be aware that if they enter the password, the player can make more than one purchase. The password remains valid for 30 minutes to continue purchasing, even after the game has been exited and resumed.

Players can earn game currency if they like the app on Facebook. Players can earn extra Monkey Money when they connect to Facebook. The game suggests that players should “See how your friends are doing” and that they should compare scores with friends. When the player logs into Facebook, the app receives their public profile and friend list.

There is a co-operative play mode, in which the player is randomly assigned an online partner to complete a challenge with. The players’ first names are displayed if they have signed on to Facebook.

Players can watch ads for other apps to earn extra Monkey Money – in one instance the ad was for a Slots (simulated gambling) app.

Players are presented with ads for other apps. Players can watch an ad for another app to earn additional Monkey Money – these ads can include Slots (simulated gambling) apps. Within the app, the player receives messages encouraging them to play the app regularly.

This is a game of defence, using various items of equipment such as dart shooters and canons. The targets of these weapons are, in all cases, only balloons.