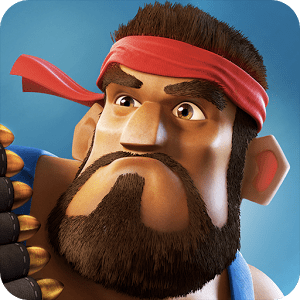 This review of Boom Beach was completed by the Australian Council on Children and the Media (ACCM) on 9 May 2015.

This review of Boom Beach contains the following information:

Boom Beach is a time and quest app. The objective of the game is to build a city with a force of troops capable of defending it. Players go on to battle enemy troops and win rewards. There are limited skills needed, but strategy and motor skills may be useful.

When the app is installed and opened, players are presented with a pop-up screen stating ‘Boom Beach is free to play, but you can speed up your progress with in-app purchases. To disable this, set up password protection for purchases in your Google Play Store app settings. You must also be 13+ to play’. After this, players are asked to sign in via a Google+ account in order to continue onto gameplay.

When the game begins, players are greeted by a male character who says ‘Commander, we’ve made a successful landing! This will be our base of operations against the Blackguard threat. We can’t let the enemy surprise us! Let’s build a Sniper Tower, we need eyes on the horizon at all times.’  Players are then presented with a top-down view of a beach, and are encouraged to click on the small hammer icon in the bottom left-hand corner in order to start building. They must then select the Sniper tower in order to build it, and utilize 100 wooden planks in order to do so. Players are able to build constructs within three categories: Economy, Defence (e.g. Sniper Tower, Mine, Mortar, Machine Gun, Cannon, Flamethrower, Rocket Launcher, etc) and Support (e.g. Landing Craft, Radar, Armory, Sculptor, Submarine and Weapon Lab). They can then tap where they would like to place the construction site of the building, and can elect to wait a set period of ‘building time’ or to skip the wait by using in-game coins.

Players soon meet Captain Hammerguard, who informs them that the islands belong to them and that they will ‘crush the puny base!’. Players can then watch the fight take place in an animated sequence – there are sound effects of individuals being injured, as well as visuals of violence, explosions, and the health bars of enemies and troops can be seen to go down gradually.

After the fight, players are encouraged to get a strike force ready by assigning Riflemen to a Landing Craft. They are able to choose troops from a range of possible troops – some are level-locked, but each have different stats and take different lengths of time to place. During battles which players are able to control and play-through, they are able to select the artillery they wish to utilize and to tap on an enemy building in order to fire. Players must tap exactly on the place they wish to fire their artillery. They are also able to deploy their teams of troops onto the ground in order to attack enemies. After battles, players receive a medal, some coins as well as some more wood. It is also shown if there were any casualties lost in the battle.

The app also contains a list of achievements that players can work towards obtaining – these include things such as ‘Upgrade Headquarters to Level 3’, ‘Remove 5 trees and rocks’, ‘Seize 20 000 gold’, etc. Players additionally have access to a leaderboard of high scores, and are able to ‘Visit’ the building sites of any other players (internationally, domestically, and amongst friends). When doing this, they are able to tap on any of the buildings and see what level they are on, how much damage or health they currently have, etc. Players earn gold, wood and gems depending on how much they build.

Players have an inbox where they can send personal messages to other players, as well as connect via various social media networks (Facebook, Twitter, Toutube, Instragram, etc) for additional features and the latest news. Players also have access to a leaderboard of high scores, and are able to ‘Visit’ the building sites of any other players (internationally, domestically, and amongst friends).