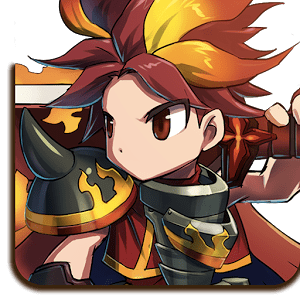 This review of Brave Frontier was completed by the Australian Council on Children and the Media (ACCM) on 22 April 2014.

This review of Brave Frontier contains the following information:

Within this fantasy RPG, players take on the role of a summoner within the world of the gods, Grand Gaia. The objective of the game is to put together units of characters that are then used to win battles and conquer land back from enemies. Players also attempt to collect coins and items, as well as gain experience in order to level up. The skills needed are predominantly strategy-based, in regards to developing the best team with the most effective elemental powers.

Land of Gaia is a dangerous place, full of demons, spirits and other mysterious beasts. Summoners used to inhabit the land, but they are long gone due to the monsters that took over. It is therefore up to the player to summon the heroes of the past to once again harness the great energy that filled the world of Gaia. Elgaia is the village players reside in when not battling through the land and trying to protect gates.

Individuals are given the option at the start of the app to play as a guest or to sign in via their Facebook account (the latter of which allows them to receive an in-game reward). After this, players meet the goddess Tilith who explains that she is a guide to help progress through the game. Players within the game take on the role of a summoner, progressing through and using their team to attack enemies that appear. This method of attacking is turn-based combat, wherein players deploy their team by tapping the ‘Action’ button. Players can choose which target to attack first by tapping them also. A unit’s HP (health) decreases when it is attacked in return, so players must be careful in defending their own characters. During battle, health crystals are sometimes dropped. When a player defeats an enemy, a large text graphic stating “WIN!” or “CONGRATULATIONS!” appears on the screen with an associated ‘ping’ noise. Enemies also occasionally drop treasure chests, which have different collectable items for players to use or sell within the game. When battling monsters, players gain experience points and in-game rewards (in the form of ‘Zel’ coins or ‘Karma’). Winning in battles allows players to acquire new characters to add to their unit – each character comes with its own pre-set level of health, attack, defence, skills and level of experience.

Players are told that they can strengthen their units by combining or fusing their characters together. It is necessary to pay in Zel to fuse units. Each character also has an element: Fire, Water, Earth, Thunder, Light and Dark. Monsters have elements in addition to the members on a player’s unit. When a monster is a water element, for instance, it is best to use a fire character to attack them. For light characters, it is best use a dark character. Players also have a special move called ‘Brave Burst’, which they may use to kill multiple enemies when the gauge for this skill is full (achieved by using regular attacks). During a battle, players can collect materials (e.g. blue drops, don nuts, green claws, etc) from their enemies – these can be useful later in the game, as they can be sold for money.

Players can elect to play through the Arena (which is a sacred place where summoners who have slain many demons battle against each other to hone their skills), undertake individual Quests or go to the Vortex Gate (where they play against Totem Units). In the Town, it is possible to buy and sell items, upgrade and synthesize facilities within the village (e.g. these can be used to make potions and antidotes when poisonings occur, or cures to replenish the health of one ally), and use spheres which allow players to boost their weapons and attack once they obtain certain items (such as the Giant Shield, White Cane or Spirit Armour).

The app may become addictive due to the nature of the game, which encourages players to continue battling in order to level and develop better teams (in an effort to battle more effectively). There are aspects that could be conducive to learning strategic skills, where players are required to match elements and craft teams that will work successfully against a range of different elemental enemies.

Yes: There is in-app purchasing in regards to gems, the form of in-game currency. Players can choose from a range of packages, including 1 gem for USD$0.99, up to 100 gems for USD$63.99.

The app asks players to sign in with their Google+ profile, so they can make their game info accessible to friends, etc. The app encourages players to log in daily in order to receive rewards and raise the rarity of the bonuses that can be earned.

There is also a ‘Social’ tab, which allows players to create a Friends List, requests new friends, Add Friends, receive and open gifts from friends, or receive special gifts by entering another friend’s ID.

There is only advertising in regards to in-app purchases related to the game itself – no advertisements for external apps or products.