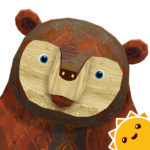 In Brown Bear Animal Parade the player joins Brown Bear as he goes for a walk and makes new animal friends. Interactive features include colouring in and recording and playing back sounds. Caution: In-app purchases.

This review of Brown Bear Animal Parade was completed by the Australian Council on Children and the Media (ACCM) on 26 February 2017.

All available game features were played and reviewed.

This interactive app is based on Eric Carle’s book “Brown Bear, Brown Bear, What Do You See?” and features colourful illustrations as made well-known in the children’s classic "Very Hungry Caterpillar". The pace, soundtrack and non-competitive nature makes the app suitable for young children. Children’s creative skills are developed when they have the opportunity to record their own sound for Brown Bear’s new friends. There are limited instructions for the young player and the app relies on the player's intuitive use. However, the parents' section – which is accessible to anyone who can read the instructions – links up with related apps that can be downloaded and/or purchased in the app store. Parental guidance is therefore recommended for young children.