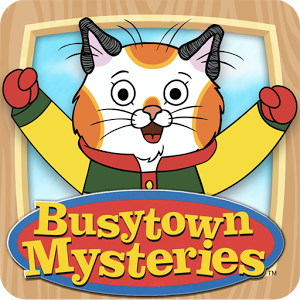 This review of Busytown Mysteries was completed by the Australian Council on Children and the Media (ACCM) on 8 November 2015.

This review of Busytown Mysteries contains the following information:

Busytown Mysteries is a memory game based on the children’s series by the same name. The objective of the game is to play through the various ‘mystery’ storylines presented, by viewing the animations and completing the memory tasks. The skills required include motor skills to use the app, as well as memory-based skills.

When the app is opened, players are taken to a sliding menu screen where different options can be selected by swiping left or right. Players are first shown an option called ToonTales, with a ‘Coming soon’ banner across it. The information presented states that Toontales will allow players to ‘Meet new characters, explore new story experiences and play fun new games. The Toontales universe will build off the Busytown Mysteries experience by providing users with access to a growing collection of age-appropriate content’. The subsequent options are the ‘Strange Ski tracks Mystery’, ‘The Mystery Present’, and ‘The Missing Pirate Gold’ (the latter two of which must be purchased before playing, for the price of $3.08).

When players select the first story, they are shown a pop-up screen which offers some additional information. It states that players must ‘Uncover the clues and test their memory to help discover who has been leaving tracks on the Busytown ski slope’. Players are told that they can play in ‘Freeview’, but that they may also purchase this toonstale episode for just $1.03 while it is in Freeview. When opened, an animated video begins to play featuring the characters of Busytown singing a brief song. Huckle is the central character who solves the mysteries that occur within the village.

After this, players are instructed to swipe left across the screen in order to view different static images accompanied by voiceovers of the characters. This involves Huckle stating that he and Lowly will be going skiing today. However, when Lowly gets scared and wraps himself around Huckle’s face during the trip down the snowy slope, Huckle cannot see and crashes whilst skiing – it is here that they come across some strange ski tracks in the snow. The game then presents 6 cards that have been turned over face-down, and players must match the three pairs of cards according to the images underneath. They are shown the images on the cards very briefly before they are turned over, and players must complete several of these memory-based activities. After completing these tasks, the animated story continues – Huckle and Lowly travel further down the slope and see more mysterious clues along the way. Huckle realises that there are ski tracks passing on both sides of a tree, which he labels as impossible. After more storyline is presented via animation, players are then asked to put cards with the clues found along the way in the correct order they were discovered. Huckle eventually figures out that the tracks were made by two snowboarders, instead of one skier.

The app also contains a section titled the ‘Parents Area’, which must be accessed by completing an activity involving moving the hands of a clock to a certain time. This offers access to the app settings, and the in-app Store where extra episodes can be purchased.