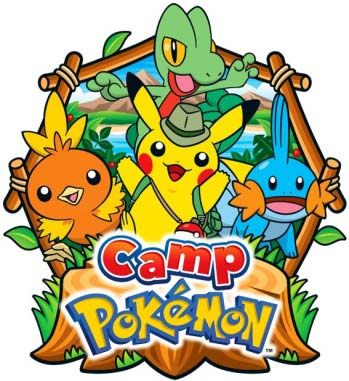 A fun activity game that teaches the player about Pokemon.

This review of Camp Pokemon was completed by the Australian Council on Children and the Media (ACCM) on 28 November 2014.

This review of Camp Pokemon contains the following information:

Camp Pokemon is a game with different activities, where the player can learn how to identify, find and catch a Pokemon.

The aim of Camp Pokemon is for the player to collect all the Pokemon. The game is set on an island and is made up of multiple mini games. The game begins with two camp counsellors informing the player about how to play the games. The first game in the app is ‘Find the Pokemon’. In this game, the player uses a looking glass and swipes around the screen, looking for shadows of Pokemon. When the player finds a shadow they must hold their finger down on the screen until the bar fills up which means they catch the Pokemon.

The second game is ‘Poke Ball Throw’, where cardboard cut outs of Pokemon move across the screen and the player must throw Poke Balls at them to knock them down. The aim for both of these games is to catch or knock down 6 Pokemon before the time runs out. The player is given special medals for completing the game in certain time limits. The Pokemon that you collect in these games are shown in a book, so you can keep track of how many you have and how many are left to collect. Both of these games have three levels, grass, rock and water. To progress to the next level you must get all three time medals.

The three other games in Camp Pokemon do not help you collect Pokemon but they are trivia games about Pokemon. In ‘Pokemon Evolutions’, the player is shown snippets of a further evolved Pokemon and they must guess what is its original form. In ‘Battle Mashups’ cardboard cut-outs of Pokemon, with their element label float down the river. The player must choose which type of Pokemon would be most powerful to knock down the cardboard cut-out. For example, Fire Pokemon are stronger than Grass Pokemon. The final mini game is ‘Pokémon in Focus’, where the player must guess which Pokemon it is from their shadow.

On the island, there is also photo booth and a cabin. In the photo booth the player can take photos of themselves and decorate it with Pokemon stickers. These photos are then either saved onto the app or the player’s device. There is no option for sharing these photos on social media. The cabin has access to the Pokemon book, the photobook and a notice board. The notice board has advertisements (see Advertising for more detail).

This app is a fun way to introduce children to the world of Pokemon. The games can help develop a child’s search and find skills, accuracy and fine motor skills.

At the end of the game, when the player has collected all of the Pokemon, they are asked to visit the Pokemon website for more Pokemon fun. But if the player clicks on the button which takes them to the website, an ‘adults only’ protection appears which asks the player to solve a times table, such as ‘what is 12 X 14?’. This protection may prevent younger children accessing the website but it is unlikely to prevent most children as the calculations can be simply solved. On the Pokemon website the player can explore types of Pokemon, watch Pokemon television, play other Pokemon games and join the Pokemon trainer’s club. To join the club the player must give their date of birth, country and email address.

Overall this app does not contain concerning behaviour, however, some of the mini games may encourage children to try and catch or throw objects at animals.

Violence and Scary Material: In the Battle Matchups game, there is a mention of training for battle but there are no actual battles. Some younger children may find some of the Pokemon scary as they have fire and sharp teeth.