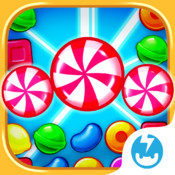 In this puzzle-style game the player must swap “candies” to match up three or more candies of the same colour to collect the specified amounts of each type.

This review of Candy Blast Mania was completed by the Australian Council on Children and the Media (ACCM) on 11 March 2014.

This review of Candy Blast Mania contains the following information:

In this puzzle-style game the player must swap “candies” to match up three or more candies of the same colour to collect the specified amounts of each type.

Within this game, players start with an allocation of lives and gems. The player can swap adjoining candies if the swap will result in three or more of the same colour in a row. The matched up candies are then cleared from the puzzle and are added to the total at the top. The aim is to collect the number and type of candies specified.  The number of moves allowed is limited.  A new life is earned as a reward for successfully completing the level. Bonuses are added and total points are calculated. There are many levels, each level becoming more difficult, with new challenges. The candies sometimes flash, giving hints as to possible moves. Helpful Boosts are unlocked at various points of the games – some are free, more can be bought with gems. When a player fails to collect the right number of candies within the allocated number of moves, they can spend gems to buy extra moves. Otherwise they lose a life and can try again. When they run out of lives, they can wait a specified time for more lives or purchase more with gems.

A possible learning benefit could be that the player must plan the best combinations of moves to collect the required candies within the allowed number of moves.

Gems can be purchased (for $0.99 to $20.99).  The iTunes preview and Google Play stores give detailed instructions how to disable this function.

If players log into Facebook they receive 40 gems.  When the player runs the game in Facebook, the app receives the player’s public profile and friend list. The app requests to post to Facebook for the player, but this can be skipped. A leader board is shown, which displays the player’s first name, profile picture and rank against other cartoon character players.

None found in the game. Players are able to click on a symbol which offers them a page of free games to install and play, which may include slots and bingo games.

This game regularly offers to install another game by the same developer. Players are able to click on a symbol which offers them a page of free games to install and play. These games may include slot and bingo games, a fashion design game and a kingdom building game in which players fight other players from around the world.

Players are able to click on a symbol which offers them a page of free games to install and play, which may include a fashion design game.