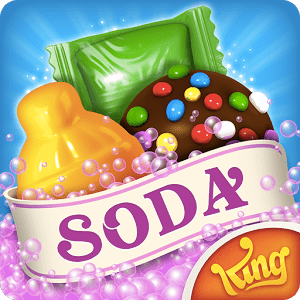 This review of Candy Crush Soda Saga was completed by the Australian Council on Children and the Media (ACCM) on 9 December 2014.

Candy Crush Soda Saga is a match three puzzle game where players slide images of items across the screen in an effort to match three or more of the same kind, and create cascading combinations of items. The objective is to play through the multiple levels of increasing difficulty, learning new combinations and matching more items where possible. The skills required to play are spatial/visual, lateral thinking, and problem solving.

When the app is opened, players are brought to a title screen that contains a large ‘Play!’ button, as well as a button that may be used to connect via Facebook. The background is filled with bright colours, candy and lollies, as well as two young female characters.

After clicking play, users are then brought to a screen with a winding path of levels – one of which is unlocked. It is visible that players have 5 hearts already, as well as 50 gold bars. More gold bars can be purchased for real-life money within the game. Conversely, it is possible to ‘Ask your friends for more lives’ by signing into a Facebook account.

Once a player begins level one, they are given instructions in a pop-up screen to meet the goal of ‘matching the bottles to raise the soda’. A board of images then appears, containing candies of various shapes and colours. Players must then match two candies in a row with a soda bottle in order to raise the soda level. They do this by swiping up, down, left or right in order to move a bottle to match it with two similar coloured candies, so that they form a line of three – these three then disappear from the board, and all the objects above drop down to fill the gaps. The soda level then increases on the backdrop of the board. Once players complete this, they are brought to a pop-up screen – this offers them three gold stars, as well as a score and their comparative achievement to the highest score obtained.

As the levels increase, the difficulties and challenges within them increase also. The board becomes larger and more items can be moved and matched, whilst the bottles needed to raise the soda level are also locked into place (and must be unlocked by matching three, and then matching a second lot of three in order to burst them). When players win higher levels, the word ‘Sodalicious’ or phrase ‘Soda crush’ appears on the screen in addition to it being verbally spoken in a deep male voice. This indicates that players have completed the goal, and they are told they have ‘popped all the bottles!’. At Level 6, the goal changes to ‘Find the bears’. Players are then told that they must crush the ice to save the bears. Getting three in a row will set a bear free. As the levels continue, different goals become evident – for instance, ‘activate the lollipop hammer to crush any candy’. Some of the suggestions appear to be inappropriate for younger users in regards to its message, such as ‘Smash any candy that is giving you a hard time. Revenge is sweet’. In addition to this, the app encourages players not to quit the game – when players elect to do so, a pop-up screen appears with an image of a girl crying. There is a sign underneath stating ‘You pressed the quit button’, with an option to Retry instead of quitting. This may encourage addictive game-playing behaviours in children.

Despite this, the app does not appear to pose any overt risks to children, and aside from risks associated with in-app purchase, it may provide a fun way of practicing spatial/visual skills as well as basic geometric and problem solving skills.

In order to obtain more hearts/lives, players may connect via Facebook and ask their friends to assist them. This is the central feature associated with online social media connection.

The app contains advertisements for the creator of the application, ‘King’. This occurs at the end of each level, when a full-screen temporarily appears with the King logo in the centre of it. There does not appear to be any advertising for external apps.