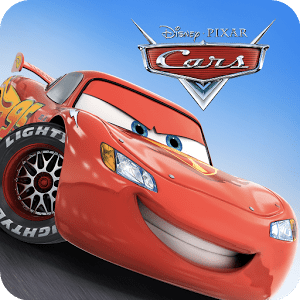 A racing game that involves working through various tracks and races. The game involves acceleration within the races, as well as timer-and-quest building within the towns.

This review of Cars: Fast as Lightning was completed by the Australian Council on Children and the Media (ACCM) on 21 October 2014.

This review of Cars: Fast as Lightning contains the following information:

Cars: Fast as Lightning is a racing game where players work through a series of various tracks and races. The objective of the game is to earn XP points and stickers that can be used to unlock car upgrades, better vehicles and more difficult tracks. The skills needed include reaction time skills, in addition to effective motor skills.

When the app is opened, music begins to play and a warning pops up on the screen directed at parents. It states ‘Dear parents, thanks for your attention! You can download and play the Cars: Fast As Lightning app for free. However, please be informed that the app also allows you to play using virtual currency (called gems or coins), which can be acquired by playing mini-games, watching advertisements, or paying with real money.’ It does suggest that parents do not share their Google Play password with their children, and to ‘restrict or disable in-app purchases via device settings’. It also directs a comment to children, by stating ‘Kids, please ask a parent before playing the game or making in-app purchases’.

The app then begins with a brief animated video, where two cars are seen racing each other. The red car then states: ‘Being a Piston Cup race car is pretty great, I’ve got the whole world to see’. As the animation continues, we discover that the two cars are called Mater and Dad-gum, and they wish to go and see how great Radiator Springs is.

The two then engage in a race for which players are instructed to drive the car. Players are told that they must press the pedal on the righthand side of the screen in order to accelerate. They must lift their finger off the accelerator when going around turns, or they will crash and go off course and lose time. After winning, players are taken to a screen with a large ‘You Win!’ pop-up appearing. This also displays the experience points earned by the player. After this, a second pop-up appears stating that players have earned a ‘sticker’ – they are told that they must win races in order to earn stickers, which subsequently allow them to unlock new cars.

As the app progresses, players race through more complicated tracks – there are increased numbers of bends and curves which they must navigate, as well as intricate paths where players must swipe their device screen upwards to get enough air under the car in order to complete jumps. New tracks are gradually unlocked as players progress and win more races. When new tracks are unlocked, players are able to race multiple different cars in order to obtain the cup.

There is also an options menu within the game, and a ‘GL Connect’ Menu which allows players to browse other games/apps, news, an online forum for the producers of the game, as well as some information on frequently asked questions.

There are some races that players cannot win unless they ‘tune’ or upgrade their car. In order to do this, players must use their experience level to make changes to their car. These can take between minutes to an hour, and players can skip the waiting period by using more of their items. This encourages players to make in-app purchases in order to skip waiting periods. The issue of waiting periods is also present in regards to the game’s feature of time-and-quest city building – when players visit various towns, they may tap on stores and buildings and spend time creating them. They receive rewards for this, and may use their existing virtual currency to speed up the process time of actual creation (e.g. from 1 hour, to seconds). Gems can also be used to buy more fuel – players will run out of fuel after running multiple races, and must either wait ten minutes or so, or use a gem in order to instantly receive fuel so they can continue playing.

There appear to be limited risks within the game aside from the in-app purchasing, and it may assist in the development of motor skills and reaction times.

There is a section of the app that enables players to connect with friends. This is level locked. It is also possible to connect via Facebook or Google+, in order to receive gifts from friends and team up with them in races.

It is possible to obtain gems and coins by watching free advertisements – these appear as full-screen ads and must be manually closed, lasting approximately 30 seconds each. These ads feature other games and external apps by the same creators of Cars: Fast as Lightning.