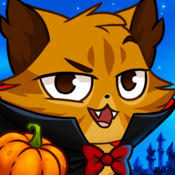 Castle Cats is an "idle" role-playing game, with the main goal of collecting game characters and fulfilling quests. Mild cartoon violence themes, in-app purchases, connectivity with social media and advertising make it unsuitable for children under 9 and parental guidance is recommended for children under 13.

This review of Castle Cats was completed by the Australian Council on Children and the Media (ACCM) on 30 October 2017.

This review of Castle Cats contains the following information:

A representative amount of levels/quests was played over several days.

Castle Cats is set in the fantasy kingdom of Catania. The player has to recruit and manage heroic cat warriors to defend their world against evil dog villains. The story, as well as tasks, are explained in comic dialogue sequences. The player has to fulfil quests in which one, or several cat heroes, oppose an enemy. Here, game play is limited to assigning one or more characters and then tapping on the screen to increase attacks on a static opponent. Alternatively, the player can simply sit and wait because the quest is eventually fulfilled automatically, thus the term "idle" role-playing. There are no specific skills required; the game has no educational elements.

Castle Cats belongs in the relatively new genre of "idle" role-playing games: actual game play is minimal and interaction optional. Instead, rewards can be earned by logging in regularly and spending time on the platform, by connecting with social media, watching ads for other apps with links to the app store, or by purchasing items for money. Players have access to a chat room to discuss the game with other players. The reviewer came across numerous requests from users to be added as friends on Facebook in order to earn rewards. Chatting and adding strangers on Facebook in the case of an existing account poses potential risks – parental guidance is therefore highly recommended.

Rewards can be earned by watching ads, e.g. for other apps. There are also ads for Castle Cat merchandise products with links to buy them at amazon.com