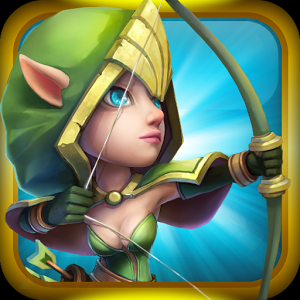 This review of Castle Clash was completed by the Australian Council on Children and the Media (ACCM) on 12 February 2015.

This review of Castle Clash contains the following information:

Castle Clash is a timer and quest app. The objective of the game is to build a city with a force of troops capable of defending it. Players go on to battle enemy troops and win rewards. There are limited skills needed, but strategy and motor skills may be useful.

When the app begins, a pop-up screen appears that informs players that ‘Troops are important, not only for offense but defence as well. Troops that survive a battle will return to your Base. When attacking, tap the screen to deploy your Troops. You can’t deploy your troops in any area that is shaded red.’ After this brief tutorial, players begin a battle. They are taken to an overhead view of a battleground, where they have a range of Troops to send in and attack. This is done by clicking on one of the troops and clicking again within the battle arena (however, players cannot place troops within the direct red-coloured area of battle). The troops must then battle and reduce the health of the opposing troops – lots of troops are needed in order to do this and to take over the enemy base. Once this occurs, players are presented with a ‘Victory!’ screen that offers stats on how many losses a player took in terms of their troops, as well as the XP gained.

After this first battle, players are given more information on techniques. It informs them ‘you can recruit troops in the army camp. Troops will defend the area around their Army Base. Upgrade your army camp to expand its capacity, recruitment queue, and the radius around it that your troops will patrol.'

When clicking on a particular army camp, it is possible to collect info on it, level up a camp or hire new troops in order to expand it. The troops a player may hire have different stats and levels of skill, so it is important for players to consider which troops might be of most value. The app has timer-and-quest components within this part of the game – players may speed up the time it takes to train a troop by using in-app pink crystals. Players are also informed that they may ‘Complete dungeons to win loads of resources and prove your military might! Collect hero shards from dungeons to exchange them for mighty heroes!’ When players battle, they have a set amount of time to complete the battle and win the enemy base. There is some violence present, as the tiny figures of the troops attack the enemy troops with swords – this is highly animated, however. It is possible to build and upgrade structures, expand the town and improve the city’s defences.

Within the app, there is a store that allows players to purchase a range of equipment for their troops. These are broken down into the categories of Treasure, Shields, Decorations, Resources, Attack and Defences. Each of these categories contains a range of items that can be placed, with each taking a different length of time to be completely crafted. After buildings are crafted, players will reap in-game rewards in the form of currency and experience.

There is a LIVE Chat Support option for players to access if they are having trouble – here, players may speak with other individuals playing the app by choosing a username. This feature appears to be unmoderated, with other players frequently asking ‘Lets be friends!’. The app also offers the ability to send private messages between players.  Players additionally have the option of earning in-game gems if they sign in via various social media websites such as Facebook, Twitter, Google Plus and Email. By telling friends about the app, players earn additional rewards. The app also contains links to an online Amazon store where players can purchase merchandise (such as a Castle Clash t-shirt).