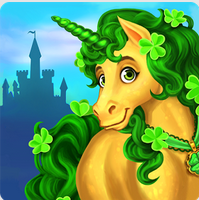 This review of CastleVille: Legends was completed by the Australian Council on Children and the Media (ACCM) on 2 April 2014.

This review of CastleVille: Legends contains the following information:

This is a strategy game, with elements of planning and resource management. A player manages farming, trading, and quests to advance through levels. The objective of the game is to build and restore the fictional kingdom. This game requires skills of resource management and planning.

CastleVille: Legends is a game in which the player is tasked with the reconstruction of a fictional kingdom by a wizard. The player operates farms, tends to orchards and livestock, refines goods through kitchens and workshops, and sends in-game characters on quests for rewards. These rewards are used to upgrade the play environment, and level up the kingdom.

This game contains elements of strategy, forward thinking and planning. The player begins with a small allocation of the two in-game currencies, coins and crowns. From there, the player is led through a series of simple tutorials in how to build different buildings, how to harvest resources, how to unlock new heroes to send on quests, and how to unlock new terrain to utilise in the betterment of their kingdom. Players progress through levels via the completion of various tasks, including activities such as selling resources, sending heroes on quests and exploring new lands. From early within the game, there is a focus on trying to get the player to link the game to their Facebook account, and trying to convince the player to buy more in-game currency to speed up various tasks that the player would otherwise have to wait for. Menus frequently pop up trying to entice the player into spending money on in-game purchases. Once the player reaches level 8, they have the option to spin a wheel once per day, and gain a reward from doing so.

Players are repeatedly encouraged to link their Facebook account to this app, and upon doing so, are encouraged both to invite their friends to play, and to publicise their activities and achievements on their Facebook wall.

A gambling-like activity is presented within the game, wherein the player can spin the "Wheel of Wishes" once per day to gain a reward. The player is encouraged to invite friends to play the game, in order to gain more spins per day.

The app perpetuates gender stereotypes in terms of clothing and attire, but is subtle in doing so.

To achieve success in this game, players are required to access the game frequently to review the progress of resource generation and for the collection of rewards.