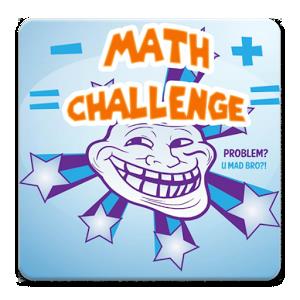 Cheer Math is a math quiz equation-based app which goes up in difficulty as players progress.

This review of Cheer Math was completed by the Australian Council on Children and the Media (ACCM) on 20 June 2014.

This review of Cheer Math contains the following information:

As there are no specific levels, this review focuses on approximately 2 hours of play.

Cheer Math is a simple game involving working out maths equations of increasing difficulty and length. The objective of the game is to complete equations and obtain the highest score possible for each 30-second round. The skills required to play are mathematical ones, and involve addition and subtraction within equations.

Once the app is opened, a home screen appears containing various options: ‘Play Now’, ‘Tips’, ‘More Games’ and ‘Like this game? Rate for us!’. The Tips segment takes players to a page which states the following: ‘1. Choose Plus or Minus sign to have right expression, 2. The game over when you get the wrong answer or the time is up, 3. Each five right answers you will have some extra seconds.’ The More Games link takes players to the Piolab website, and suggests that ‘there are more awesome apps about to be released’ – they may elect to ‘follow’ the website from here and be alerted when new apps are released. There is also a bar of advertising along the very bottom of the screen.

Players must select the ‘Play Now’ option in order to actually play the app. When playing, a screen with an equation comes up such as 2-7=-5  and players must select either a Plus or Minus sign in order to complete the equation. If players get the answer wrong, a box comes up with “Wrong!” stated within it, and an ongoing score of New and Best stats is reported. There is a 30 second timer which will let players know how long they have to answer each question. There is also a Twitter and Facebook icon for the app which comes up when a wrongful answer is given, and takes players to the corresponding pages related to the app. However, when players click on the Facebook icon, they are taken to a Facebook page which states ‘App Not Set Up: The developers of this app have not set up this app properly for Facebook login’.

The app does not pose any overt risks to children, but does encourage the practicing of mathematical skills which could be very useful in a school context.

Players are encouraged to connect to Facebook. There is also an option to connect and sign in via Twitter, and compare high scores with friends by doing so.

The app contains a small and non-invasive bar of advertising along the bottom of the screen. This bar contains advertisements for the Google Play Store, as well as individual apps and games.