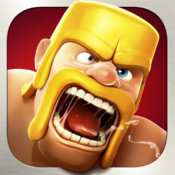 This review of Clash of Clans was completed by the Australian Council on Children and the Media (ACCM) on 5 April 2014.

This review of Clash of Clans contains the following information:

In this combat strategy game, the player builds a village, trains troops, joins a clan and engages in battle, potentially with other players online. This requires strategy, planning, time management and resource management skills. The player must consider the most beneficial way to use their gold, elixir and gems.

The player begins this game with an allocation of gold and the premium currency, gems. They must construct a variety of buildings like barracks, builders’ huts, a town hall and storage for gold and elixir. They must continue to add and upgrade these buildings – this requires gold or elixir. They must also begin to mine gold and elixir, which are required to train troops and construct or upgrade buildings. Players should also construct defences. There is a list of achievements players can work towards -   as tasks are completed, they receive rewards of gems and experience points.  Building uses resources and time, which may be considerable as higher levels are reached, hours or even days. Gems can be used to speed up game activities and buy resources and gold. Gems can be bought with real money.  Players must also train troops at the barracks. These activities also require resources and time. When attacking other villages, players may be rewarded with gold and elixir if successful.

Players can play in single player mode, in which they attack a series of villages on a map. They may also play in multiplayer mode.

When players attack, they tap the screen to deploy their troops. Then the selected troops run to the chosen village, shouting and waving their swords about or firing arrows. They attack defences (like cannons) and buildings. Some (or all) troops may be lost to their opponent’s defences. As the player moves to higher levels, superior troops are unlocked and may be trained, as well as spells. As the player trains more troops, they will also need to upgrade their camp and barracks. The player’s village can be vulnerable to attack from other players and they may lose gold and resources when attacked. When players first begin playing, they are protected by a shield for 3 days. The shield is disabled if they attack other players in this time. Additional shield protection may be bought with gems. Various defences are unlocked as the player moves up levels and can be bought with gold.

Players may join or create a clan. Players may have to reach a certain level or have won a certain number of trophies before they are allowed to join a given clan. Many top ranking clans can be joined by invitation only. Players can request help from clan members in the way of resources and troops, and may also be requested to help other clan members by providing troops and resources.

It is possible to chat and send messages amongst clan members. Players are requested to be respectful and polite towards others and that offensive behaviours will not be tolerated. As the chat may not be monitored, it is possible the content may sometimes be inappropriate for children (see Other section below). Players can Report inappropriate messages and behaviour. Entering into a clan will bring the player into online contact with strangers (unless they have created their own clan which is populated only with friends, which is possible but may be unlikely, especially in the early stages). Parents and children should be aware of the potential risks and take appropriate precautions.

This game can become complex and has many levels. It appears from the chat conversations and forums that many players are at a very high level and possess extensive resources which have been either purchased or taken considerable time to achieve.

This game requires the player to consider the best use of resources, strategise, invest considerable time and be patient.

Players can connect to Google+ - the game receives the player’s basic profile information, people in their circles and may make game activity visible on the web (this can be edited). There is a leader board of Top Clans and Top Players. It displays the Top Players’ chosen game nickname, their alliance name and trophies. Players can view their profile, visit their village and view their clan. Players can connect to Facebook in Settings – the game receives the player’s public profile, email address and friend list. When playing online in multi-player mode, players may be contacted by other players who are unknown to them.

Parents should be aware that there is capability to chat and send/receive messages to/from other players. Conversations appear to be unmonitored. Players can view other players’ basic game information, visit their village, view their clan, send a message or mute that player. Many of the conversations are about game strategy and tips. However, from time to time the chat content may be inappropriate for children – this may be due to the language used (some players code profanities but others do not) or the nature of the conversations, which can be abusive at times.

This app is currently under review for gambling content

Please see Other section below.

Players may attack and steal from other players.

Violence and scary material: Players’ troops attack other villages with swords and other weapons. When troops are killed, they moan or cry out.

Parents should be aware that there is capability to chat and send/receive messages to/from other players. Conversations appear to be unmonitored. Players can view other players’ basic game information, visit their village, view their clan, send a message or mute that player. Many of the conversations are about game strategy and tips. However, from time to time the chat content may be inappropriate for children – this may be due to the language used (some players code profanities but others do not) or the nature of the conversations, which can be abusive at times.