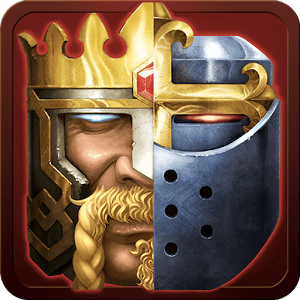 This review of Clash of Kings was completed by the Australian Council on Children and the Media (ACCM) on 23 March 2015.

This review of Clash of Kings contains the following information:

This review focuses on levels 1 -5.

Clash of Kings is a strategy quest-and-timer based app that centres on the concept of building an empire. The objective of the game is to construct buildings and structures that will contribute to the running and defence systems of the empire, and ensure that troops are well trained and equipped in regards to going to war. There are limited skills needed, but an understanding of strategy and problem solving may be useful.

When the app is opened, players are taken straight to a birds-eye view of a large battle arena. A knight wearing silver armour then appears and dictates that ‘There’s a report My Lord. The enemy refuse to surrender’. The player’s character then suggests the army ‘Make them pay the price in blood!’ The knights soon reply with statements such as ‘Your warriors are ready!’ and ‘We can’t wait to taste their blood!’. A small button appears in the centre of the screen, stating ‘Charge!’. Once this is pressed, an animation ensues where lots of warriors shoot arrows at a barraged castle wall, eventually break the wall and storm the area.

The game then skips forwards to the following day, where players are informed that the enemy is going to attack and that they need to build an empire for safety. The first step is to create a Sawmill, as wood is crucial for the empire’s growth. Players are then shown how to tap on a particular block of land in order to begin building. Upgrading builds such as this will increase both yield and storage capacity – this is done by utilising gold coins.

Wood is then used in order to produce a Stable, where the cavalry troops can be trained. There are certain requirements for specific builds – these take the form of Level requirements, as well as the number of construction items available. Building things gathers players more experience points, which in turn eventually increases their experience level. At the Stables, players are able to train troops when they have enough resources to do so. Players are also required to build a farm to produce food. It is possible to speed up the pace of builds by utilising gold coins. Waiting times for each build/upgrade differ considerably, and longer time periods require more gold coins in order to be skipped. Gold can be obtained by completing various pre-set quests – these quests involve actions such as ‘Build 1 Farm’. Players are able to harvest the rewards and resources from these builds once a set amount of time has passed. Players are also asked to build structures such as Colleges – research can be done within these buildings that can assist in further developing the empire.

It is also possible for players to ‘explore the world’. Upon travelling to other areas, players are told that word of their kindness has spread, and other knights wish to join their cause by offering small donations in the form of resources. These take time to collect, just as building construction does.

Players are able to view their character profile by clicking on a button in the top left-hand corner of the home screen. This page not only displays character health as well as their experience level, but it also displays their combat status (e.g. wins, losses, kills, etc) and any armour and equipment they may have. Players also collect Skill Points by completing activities within the game, and these can be assigned to particular things – for instance, assigning Skill Points to ‘increase Max Load of Marching Troops’ for a stronger offensive attack. Skill Points can be allocated to Combat, Develop or Support-based skills.

Players can also access a store where resources may be purchased in bulk for a set amount of gold coins. For instance, 10 000 wood can be bought for 40 gold coins. In addition to building resources, players can also purchase war-related items. These include defensive items such as an 8-Hour Peace Shield for 500 coins, or March Acceleration for 600 coins.

Players are also encouraged to join Alliances. Each Alliance is comprised of other players who also play the game, and each one may have different regulations (e.g. ‘We need active people – if you are offline in 3 days, you will be kicked out’). It is possible to send private messages to Alliance Leaders in the process of applying to these Alliances.

Players are encouraged to sign in via a Facebook account – they are given the incentive of in-game treasure and unknown rewards. They are also encouraged to invite friends via online social media. The game also incorporates a private messaging function, where players can send inbox messages to Alliance leaders when attempting to join an Alliance of other players.

The app appears to contain pop-up advertisements for their own in-app purchases, as opposed to other external apps. These pop-ups must be manually closed, and occupy almost the full device screen.

The player’s character is stereotypically masculine, having a strong jawline, dark hair with a large beard, and a broad and muscular build. Conversely, the central female character Agatha is depicted as very feminine – she has long, straight blonde hair, a petite frame, and appears to have a somewhat seductive expression.

This app currently being re reviewed for gambling content.