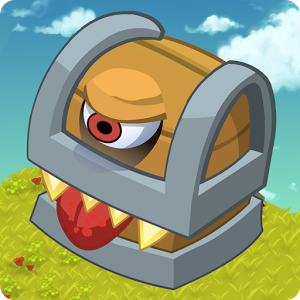 This review of Clicker Heroes was completed by the Australian Council on Children and the Media (ACCM) on 12 September 2015.

This review of Clicker Heroes contains the following information:

The app was reviewed to level 10.

Clicker Heroes is a role playing game based on attacking various monsters, and upgrading the heroes that kill them. The objective of the game is for players to defeat a range of creatures within each level, by repeatedly tapping their image – this earns players more points, which in turn allows them to purchase heroes that will do more damage when players tap the screen to attack. The skills required to play this app involve mostly motor skills and problem solving.

When the app is first opened, players are taken to an overhead view of a small patch of grass floating in the air, which has a small green creature on it. If they repeatedly tap the monster, it gradually explodes (animated violence) and another smaller monster appears in its place – players also receive one gold coin for this. Players can continue to do this, and thus browse through a range of different creatures they must attack and defeat. Each time players tap the screen, the creatures lose points from their health bar (which is positioned at the bottom of the screen). After players have done this to ten monsters, they unlock a new level where the creatures require more taps to reduce their health bar completely. As players continue to level up, the creatures presented also become more visually complex and aesthetic.

Players are able to ‘hire helpers’ for several coins – these are hero characters that will assist players in doing more damage per tap. It is also possible to level-up these heroes, by using in-game gold coins to make them do increased amounts of damage. As players progress through the levels, there are time limits on the fights players must win (e.g. boss battles) – as a result, players must go back to the previous level, farm more gold and enlist more support from higher-level heroes before tackling the more difficult monsters. With the higher-level heroes, players will be able to have their heroes destroy enemies for them at a fairly rapid pace – they do not need to continually tap, but may do this if they wish to speed up the process.