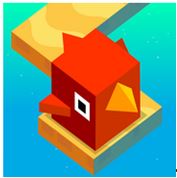 Cloud Path is a speed and precision arcade game

This review of Cloud Path was completed by the Australian Council on Children and the Media (ACCM) on 4 August 2015.

This review of Cloud Path contains the following information:

This app was reviewed for approximately 1 hour of gameplay.

Cloud Path is an arcade game where individuals play through a maze-like path as a small creature. The objective of the game is to tap the correct side of the screen to make their creature either move forward, or jump up, therefore progressing through the path. The skills required include motor, as well as quick reflexes and precision.

When the app is opened, players are asked to sign in via a Google+ account in order to progress to gameplay. After this, players are taken to the initial screen and told to tap the right side in order to move the small bird cube they are playing as. Tapping the right side of the screen moves the bird forward, whereas tapping the left side moves the bird upwards and causes it to jump up a platform. If players do not tap quickly enough, their bird will fall off the maze and players will need to restart the level.

Gems can be used to purchase a new skin for individuals to play as. For example, when players obtain 20 gems, they can play as a small sheep instead of a bird. These options increase to amounts of 600 gems. If a player does not have the required gems, these can either be obtained within the game itself or by completing in-app purchases. Obtaining 500 gems costs $1.19, 1500 gems costs $2.44, and 5000 gems costs $6.15.

Players are able to view their score on a leaderboard of either every other player with the game, or just other individuals within their Google+ social circle. Players have the option to set their rank to private or public.

Players have the option of viewing a leaderboard with the scores from people all across the world. There does not appear to be any way to directly communicate with other players, however. Players are also able to share their high scores with other individuals via social media platforms such as Facebook.

Before gameplay has begun, a pop-up advertisement appears.  It is a static image advertising the game Cube Jump by KetchApp. During gameplay, there are also banner advertisements that are positioned along the bottom of the screen – these include ads for Audible Books, websites such as LVS (a holiday website), Lumo Business Energy (specific organisations), etc. Players also have the option of viewing full-screen video advertisements in order to earn additional in-game gems.  These include ads such as ‘Magic Rush: Heroes’ and ‘Game of War: Fire Age’ (violent content), etc