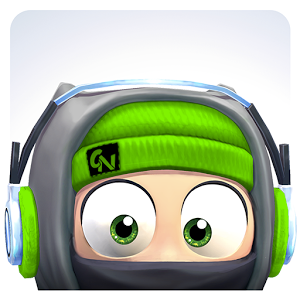 Clumsy Ninja is a game based on an interactive character and their development.

This review of Clumsy Ninja was completed by the Australian Council on Children and the Media (ACCM) on 25 March 2015.

This review of Clumsy Ninja contains the following information:

This review focuses on levels:1-8

Clumsy Ninja is an interactive character game where players must train their unskilled ninja into a true fighter. The objective of the game is to progress through various training activities with the ninja, thus making him stronger and more capable of fulfilling his destiny. There are limited skills needed, but motor skills and reflexes are required.

When the app is installed, players are informed via a pop-up that they must sign in via a Gmail or Google+ account in order to proceed. From this screen, players are taken to a beautiful field where an old man welcomes them to ‘Ninja training’. A small person dressed in a black and red ninja outfit then walks into the frame. The old man then mentions that the ninja ‘is clumsy and needs your help’. Players are subsequently presented with a small screen that offers multiple options (such as ‘Lift him up’, ‘Lead him’, ‘Foot lift’, etc) and are told to shake the ninja’s hand. Tapping and holding onto the character’s hand successfully completes this. Players then must tap and hold both of the ninja’s hands in order to slowly and gently lift him up. This is done because ‘ninjas need to be ready for anything!’. It is possible for players to collect coins as well as experience points for completing these actions.

Training actions gradually become more complex – for example, players are asked to hand the ninja two balloons from the ninja kit, and then to attach three balloons to the ninja’s feet. This results in the ninja being tipped upside down, and players eventually being directed to pop the balloons to free him.

The ninja improves with increased training, and players are encouraged to do this. For instance, players must purchase a trampoline for their ninja to practice jumping on. This can be bought from the in-game store. Although the first trampoline is free, the subsequent improved trampolines cost varying amounts of gold coins – some of these are level-locked also. Players can tap the trampoline to make their ninja jump on it, and are then required to swipe left and right with their finger to move the trampoline as their ninja jumps in random places. If they can keep their ninja on the trampoline for a set period of time, they successfully complete the activity. Players receive yellow stars after doing this, and the number of yellow stars obtained correlates with how well the activity was completed. Players also need to master tasks such as ‘Throw the ninja onto the roof of the stalls’ – this involves players tapping and holding anywhere on the ninja’s body, raising him into the air and throwing him around. He hits the roof of the stall, and slides back down. There may be some concern that, due to the realistic and human-like movements of the ninja, young players may enjoy simply being violent with the ninja’s character. It is possible to tap the ninja and have this express a shove or a punch within the game, and although there are set productive tasks to complete, it is possible to play freely and throw the ninja around at a player’s will.

After some time spent training, players are shown a short animated clip of their ninja play-fighting with another female ninja named Kira – it is shown that he really misses her, and needs to find her. The ninja must earn belts in order to travel the path of the ninja and achieve this, so the app encourages players to continue training their ninja in a variety of ways (e.g. defensive skills, offensive skills, etc). The game also has timer-and-quest qualities, where activities can be sped-up by utilising the purchasable coins or gems in order to save time.

It is possible for players to take a photograph of their ninja at any point, simply by clicking on the camera icon in the top left-hand corner of the screen. Once they do this, they are encouraged to share this photograph via social media websites like Facebook, in exchange for a gold coin reward. Some of the compulsory activities within the game involve taking a photograph of the ninja, both within the game, and also photographing the ninja in an image with players themselves (as the ninja is superimposed onto the regular camera of a player’s device).

It is possible for players to take a photograph of their ninja at any point, simply by clicking on the camera icon in the top left-hand corner of the screen. Once they do this, they are encouraged to share this photograph via social media websites like Facebook, in exchange for a gold coin reward.

Players are able to receive a ‘free gift’ in the form of coins or gems if they watch a video advertisement. This option is available to players by clicking on a small Play icon in the bottom middle portion of the screen. This then opens large full-screen video advertisements for other apps (e.g. Clash of Clans, Racing Rivals, Cooking Fever) that cannot be closed until they have finished playing. Players are able to watch three videos per day. In addition to this, there are occasionally full-screen static picture ads that appear of other external gaming apps (e.g. Clash of Clans, as well as Angry Birds: Stella). The app also contains pop-up advertisements for the in-app purchases within the store – these appear frequently, and must be manually closed before moving on.

The extensive in-app purchasing features, and frequent advertising of the various in-app purchase packages, may encourage the spending of real-life money – this may pose a concern to parents of younger players.