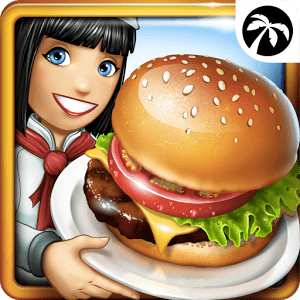 This review of Cooking Fever was completed by the Australian Council on Children and the Media (ACCM) on 27 March 2015.

This review of Cooking Fever contains the following information:

Cooking Fever is an interactive arcade game based around time management in a restaurant context. The objective of the game is to serve as many customers as possible, before any of them become impatient and leave without their food, thus not paying or leaving any tips behind. Within the game, players require skills in strategic thinking (in terms of the ordered selection of customers), time management and motor skills.

When the app is installed and opened, players are presented with a pop-up screen informing them that they must sign in via a Google+ account in order to play. After they do this, they are met with a young girl wearing a chef’s outfit – she introduces players with a welcome message, and states that ‘your goal is to try yourself in various cuisines and become the best chef in town’. Players are asked to begin in a ‘simple diner’. When beginning Level 1, players are given a goal of Coins to achieve. They are then placed inside the kitchen of a small diner, where the introductory character Michelle points players towards tapping on the small icon of a hamburger bun. They are then directed to tap on a piece of meat in order to put it on the stove. The meat takes a few seconds to cook, and then changes in appearance to a dark caramelised colour – it is then ready to be dragged over and placed on the burger bun. Players can then drag the finished bun to the waiting customer. After completing this action, players are directed to tap on the coins they have earned, which the customer has left behind for them. Serving customers food earns the player play coins as well as experience points.

Customers will approach the bar, and a small box will appear over them with an image of a burger, a cup of coffee, or both. Customers will wait a set period of time before they leave without their meal, unhappy with the time it took for them to be served. Multiple customers will appear at a given point in time. If a burger patty is left on the stove for too long, it will burn and need to be thrown away. Only one burger and one cup of coffee can be made at one point in time, in the early levels of the game. The game contains achievements to unlock – these include things like ‘Serve 1 client’, ‘Serve 50 customers with a moustache’, ‘Sell 200 drinks’, etc.

Coins are utilised to purchase kitchen upgrades, both for appliances and ingredients. Upgraded equipment works better, whilst additional ingredients make a fuller, balanced meal, and can thus earn players more monetary rewards. At the end of completing a level, a congratulatory pop-up screen appears which states ‘Level Up! You have reached Experience Level ___’, and offers players a reward in the form of coins as well as several blue gems. They are also presented with the statistics of how many customers they served compared with those they lost, as well as their current financial balance.

As players progress through the app, they are able to add additional ingredients such as hot dogs, lettuce, etc. They can also use the coins they gather to upgrade the interior of the restaurant – this makes ‘customers more likely to come to a cozy and well-arranged restaurant’. The game informs players that customers will also be more likely to be much more generous financially and patient with their orders. In the building/purchasing of new furniture, players are able to wait a set amount of time for these to be built, or use blue gems in order to skip waiting periods.

There is a small icon in the bottom left-hand corner of the screen, which says ‘5000 free coins!’ – if players click on this, a pop-up window appears stating ‘Install and RUN our game ‘Game Banjo’, and get 5000 coins for this’

As this game is progressed, a casino is unlocked which allows coins earned in game play to be gambled. This app is currently under re review.