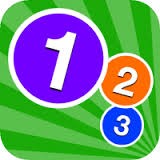 This review of Counting Dots - Preschool Toddler Learn To Count Number Game was completed by the Australian Council on Children and the Media (ACCM) on 28 March 2014.

This App presents a series of numerals in dots. The aim of the game is to touch on the numerals in the correct sequence.

In the parent settings, there are links to additional games and the ability to change game play, for example starting at a higher number or counting by other sequences than 1 (for example the game can count by 2s, 5s or any other interval chosen).

In user testing, some children found the game engaging, but as there is only one main activity game, play was limited and little revisiting occurred.

Links to other apps by the developer in the parent sections.