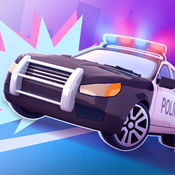 Crash Club is a car derby game set in a city environment. Fine motor skills and quick reaction time needed to play. Caution: not suitable for children under 13 due to gambling elements and social media connectivity. Parental guidance for children 13 – 15.

This review of Crash Club - Drive & Smash Live was completed by the Australian Council on Children and the Media (ACCM) on 23 July 2017.

In this game, players must survive as long as they can whilst driving around a city with other multiple players. This is achieved by attacking other players with weaponry (attached to the top of the vehicle) and avoiding other players that are attempting to destroy you. Various currencies can be earned during the course of the game including Tokens (which can be used to repair your vehicle and attach weapons), Gems (which can be used to unlock further features such as new vehicles and upgrades for current vehicles) and coins which can also be used to unlock upgrades such as decals and wheels. The aim of the game is to survive as long as possible and to gain the highest standing on the current player leader board.

Driving is achieved by swiping left and right, whilst the vehicle moves forward automatically. Swiping backward stops the vehicle and swiping forward activates the turbo function for a short period of time (if you currently have the turbo function). These movements aren’t always easy to execute, especially when trying to drive between close buildings and turning in a tight circles – thus fine motor skills will be required. Also, fast reaction time will be a beneficial skill to get away from sudden attacks – which often occur from outside of the player’s current view of the playing field.

As indicated above, game-play can be quite frustrating at times – particularly with manoeuvring the vehicle and being attacked from outside of you current field of vision. Survival in this game is very dependent on currency – as tokens are needed for weapons and repairs, but these are not always readily available within the game and can only be found by crashing into random objects (such as tress and bus stops, etc.).

At the end of each game, the app offers players to double, triple and quadruple the coins that they earned by watching ads.  These ads mostly featured war style games and sometimes feature gambling. The most concerning feature however, is the free spin offered every 6 hours. This emphasises risk for reward as the player has a choice between taking an initial offer of 2 gems – or spinning the wheel at a chance for something better. Whilst it would appear that worse and better prizes were equally distributed on the wheel, the reviewer only spun 1 prize that was better than the original offer of 2 gems (in a series of about 10 spins). This type of feature is not suitable for children under 13, and it is suggested that parents exercise guidance for older children.

This game features risk for reward elements by spinning a wheel to see if you obtain a greater prize than the original offer. There are also ads featuring gambling game apps.