Crash of Cars - Not Doppler 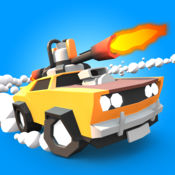 Crash of Cars is a multiplayer online game where players compete against each other in a demolition derby style event. Good co-ordination is required to play. Parental guidance recommended for children aged 9 -12, due to Facebook connectivity and in-app purchasing. Not suitable for children under 9 due to mild violence, crude humour and advertisements for other unsuitable games.

This review of Crash of Cars was completed by the Australian Council on Children and the Media (ACCM) on 18 June 2017.

This review of Crash of Cars contains the following information:

The reviewer played for several hours over a couple of weeks.

This is a car demolition derby game where multiple online players complete to see who can collect the most crowns on the playing field before other players destroy your car. Weapons can be collected on the field by driving through mystery boxes. Weapons include firing cannons, laser guns, catapults and flame throwers to name a few.

Cars will travel at a consistent pace, whilst players control direction by tapping and holding left and right of screen. Holding both directions at once will put the car in reverse. Due to the askew diagonal birds-eye view of this game, correct left and right direction bearings are not always intuitive as this changes depending on whether the car is travelling towards or away from the player. Therefore, good co-ordination and mental rotation is required to play.

Despite the violent nature of crashing into other cars and using weapons against them, the designers of this game appear to be conscious of violent imagery that may not be appropriate for some children. For example, the camels on the desert course are clearly stand-up cardboard cut outs – so running into them does not represent something as hazardous as running into a real animal. The developers have also placed a 9+ recommendation on this game – which is quite good considering many other apps would have a 4+ rating for something similar. Having said this, as this game encourages playing with friends on Facebook, parental guidance is recommendation for children aged 9 - 12.

There is an interesting feature in this game that some parents may not be comfortable with. During the course of the game, players collect coins. When a player reaches 100 coins, they are offered the chance to obtain a new car. To do this, players must use their 100 coins to play a lucky-dip style machine (similar to machines where you pay $2 and you always get a toy – but you don’t know which one you’ll get). This doesn’t represent “risk for reward” and therefore cannot be deemed a gambling feature per se. However, the machine does resemble a skill tester machine and younger children may not understand the difference. The generalisation to the real world may see children putting money into a skill tester when they don’t understand that a toy may not come out.

Pop up ads occur between screens - intermittently. Players can also watch 30 second ads to earn coins. The ads are primary for other game apps and can feature violent games.

The developers have noted that there is mild profanity and crude humour in this game. Although the way in which cars can destroy each other could be construed as crude humour, the reviewer did not view any mild profanity - other than some of the names of the players (which are created by the players themselves and shown hovering above their car during play).

Destroying other players for personal gain may be a cause of concern for some parents. For example, every player's health can be seen by every other player. Therefore, it is advantageous to go after cars which have low health - as once they are destroyed, you can collect the crowns that they leave behind. As this represents targeting the weak for personal gain, the concern for consistent players of this style of gaming is the reinforcing behaviour which may extend beyond that of just game playing.