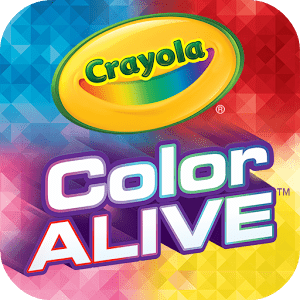 Crayola Color alive is an app based on colouring in. Caution: In app purchases

This review of Crayola Color Alive was completed by the Australian Council on Children and the Media (ACCM) on 22 February 2016.

This review of Crayola Color Alive contains the following information:

This app was reviewed for approximately 1 hour

Crayola Color Alive is an app based on colouring-in and creativity. The objective of the app is to print out various colouring-in pages, decorate these pages with colour and then scan the images in – the app then allows players to interact with the coloured characters in a 4-dimensional space. The skills involved in playing this app include colouring and motor skills.

When the app is opened, players are brought to a menu screen and offered the choice of either clicking on ‘Lets get started! I have a coloring book’ or ‘I need pages, I don’t have a coloring book’. If players select the latter option, they are given the choice of printing some free pages, or printing later and simply choosing a free character (e.g. Dragon, Barbie, Forest Fairy or Chop Chop from the Skylanders series) to work with initially. Their character then moves around the screen in different poses, and players can choose to snap a photo whenever they please. If players select that they already have a colouring book (or where they opt to print out a colouring page using a wirelessly connected printer), they must use their phone’s camera to scan and upload a page to work with.

Players are able to use Crayola colouring pencils (or any colouring pencils) in order to colour-in their pages. Once this is done, players can photograph them and upload them to the app. After this, they can tap on the ‘4D Play’ button to see their characters in 4-dimensional space – players can move their device around and watch as their coloured-in character moves around the screen. They are able to press a ‘Special Effect’ button as well, that adds additional features to the screen and brings their drawing to life even more vividly. Players are able to view their character from all sides by moving their device around.

When players click on the home button, they are occasionally shown advertisements for additional colouring-in pages that can be purchased for real-life currency. These are presented as packages costing $2.44-$2.75, and include pages such as 2-8 or 9-16 from selected colouring books. Players must enter their date of birth in order to confirm their age, and therefore be able to make in-game purchases (players must be at least 13 years of age to make purchases). The app only works with Crayola Color Alive Action Coloring Pages.

The app is somewhat confusing to utilise, and frequently encourages users to spend real-life money by presenting them with colouring options which require payment. However, the app does not appear to pose any overt risks to users, and allows children to engage in creative colouring followed by 4D interaction with the characters they have coloured in.

Yes: The game allows players to purchase additional colouring-in pages for prices of $244-$2.75. These packages include 7 pages of additional character options for users to colour-in and upload.