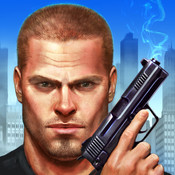 This is a crime based empire building game.

This review of Crime City was completed by the Australian Council on Children and the Media (ACCM) on 26 March 2014.

This review of Crime City contains the following information:

This is a crime based empire building game.

Within this game, the player is encouraged to build a criminal empire. The game begins with a brief tutorial, in which the first task is to rob a mini-mart. Players receive an allocation of gold and quickly start earning cash. When the player completes assigned goals, they may receive a combination of cash, XP points, Respect and useful items such as guns and other weapons. Goals may include building and upgrading buildings in their own neighbourhood, attacking and robbing people and stores and “taking out” game characters.  Players may attack and/or rob other players, who they select from a list presented. If the player wins, they earn cash and XP points. If they lose, they lose cash and may be encouraged to buy more weapons. There is a store which stocks a selection of weapons including guns, armour and vehicles.  As the player has accumulates XP points for achieving goals, they move up levels, receiving various rewards, including cash, and unlocking additional areas and items for purchase. Players use up energy and stamina, which can be replenished after time or by using gold. Players are encouraged to recruit friends to from their mafia. They can create a syndicate or join an existing syndicate, which has been created by other players. If players recruit friends to join their mafia and reach level 3, they will receive rewards. Players may become eligible  to join in battle events.

Players can share their mafia code via Facebook, email and SMS. They may request to join syndicates which have been created by other players completely unknown to them. When players log into Facebook, the game collects their public profile and friend list.

Players receive a daily free “Scratcher” – players can scratch and win a prize. More scratchers can be bought with gold.  Players may be able to build a casino at higher levels.

To earn free gold, the player can watch a video, which is an ad – this may be for other games or products, such as beer. Players can earn gold by completing “offers”, such as downloading and playing other apps, which may include other games (including simulated gambling games), surveys and an app which suggested players could “browse images of beautiful women and live chat”.

A Syndicate Goal is presented by a scantily dressed, tattooed female, who wields a pistol. Players can earn gold by completing downloading other apps, which include an app which suggested players could “browse images of beautiful women and live chat”.

Players are frequently set goals which involve criminal behaviour, such as attacking and mugging people (including an FBI agent), bribing, pick-pocketing, robbing stores and killing people. They are encouraged to create their own criminal empire and create a mafia. The game is promoted with the statement “Breaking the rules is way more fun than playing by them!” At one point, players are suggested to pawn the goods they stole the previous night.

Violence and scary material: There is a lot of violence in this game. Player goals frequently include attacking, mugging and killing characters in the game, as well as other players. Players can win or purchase a variety of weapons.

Use of substances: To earn free gold, the player can watch a video, which may include an ad for beer.