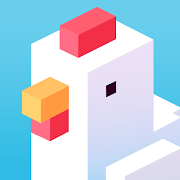 This privacy check of Crossy Road was received from AppCensus on 4 February 2022.

This review of Crossy Road was completed by the Australian Council on Children and the Media (ACCM) on 5 February 2022.

This review of Crossy Road contains the following information:

This is a runner style game with no levels.

Crossy Road is an endless style runner game where the player collects coins, crosses roads and must avoid getting hit by cars, trucks and trains.

Crossy Road is an endless runner style game shown in blocky animation. The player begins as a chicken and the aim of the game is to cross as many roads as possible without getting hit by cars, trucks and trains. The player taps the screen to jump forward and swipes to move left or right to dodge obstacles and collect coins. Coins can be used to get more characters to play with (see In App purchasing for more detail).

If a player waits too long before crossing a road an eagle will swoop in and catch them. This will end the game. The game will also end if player gets hit by a vehicle when crossing the road (see Violence for more detail).

The app has its own social networking site called ‘Everyplay’, where players can record their runs with commentary and upload them. On Everyplay the player can also view other people’s runs and post/read comments.

The game contains a dispensing machine within which a player can use or spend coin credits gained within game play to take a turn to collect a random character.

After each run the player is given the chance receive coins for watching a 30 second advertisement. These are advertisements for other app games, and once you chose to watch the advertisement it cannot be skipped until you have watched the whole 30 seconds.

None found in the game itself but the ‘Everyplay’ social networking site connected to the game may have players who post inappropriate language in the comments.

The game contains mild cartoon violence of animals getting hit by vehicles. There is no blood and gore involved but the animal gets flattened when the vehicle runs over it.