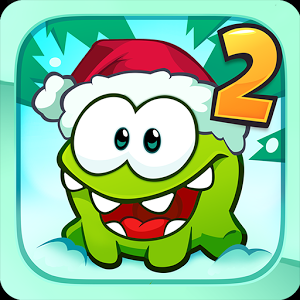 Cut the Rope 2 is a physics- based puzzle game. Caution: In app purchasing

This review of Cut the Rope 2 was completed by the Australian Council on Children and the Media (ACCM) on 20 February 2015.

This review of Cut the Rope 2 contains the following information:

This review focuses on levels:1-20.

Cut The Rope 2 is physics-based puzzle game where players ensure that the friendly character Om Nom receives lots of candy to eat. The objective is to play through the multiple levels of increasing difficulty, cutting ropes and allowing candy to swing or fall through various paths in order to be eaten by Om Nom. The skills required to play are spatial/visual, lateral thinking, and problem solving.

When the app is opened, a small pop-up screen appears that instructs parents of the following information: ‘Dear Parents! Cut the Rope 2 is free to download and play. Some in-game items can be purchased to make the game even more fun. To restrict in-app purchases please check the settings of your device.’

There is then a cut scene animation of a small green creature called Om Nom being carried away by a hot air balloon. The game then begins and players are instructed to swipe their finger right across their device in order to cut the rope that holds Om Nom. After he falls to the ground, players are told to cut a rope with contains a small piece of candy hanging on the end. This enables Om Nom to eat.

After a level is complete, players are given a total score, as well as a figure for the number of stars they collected. Stars are collected by allowing the piece of candy to fall across their path before the candy is fed to Om Nom. They then have the option to play through the next level, or to replay the previous one they just completed.

In subsequent levels, the game becomes more intricate and players are required to cut multiple ropes in order to feed Om Nom candy lollies. If players cut the wrong rope, it will be impossible to collect all the stars and candy needed to complete the level. During some levels, players must wait until the correct moment before cutting a rope – this is because the candies swing, and if a player cuts a rope prematurely, the candy may not fall onto the desired location. The game also incorporates balloons that players may click and pop, in addition to the strings that may be cut.

In later levels, players are given different objectives. For instance, they must collect 15 fruits – this is done by having the floating candy move across 15 fruit images.

The game also presents Daily Rewards in the form of coins. In addition to this, the game incorporates animated videos of Om Nom engaging in certain fun activities or adventures. These provide extra storyline and substance to his character. There are 30 stories to view.

Players are told that in order to play with friends, they must connect via Facebook.

The game includes advertisements for other ZeptoLab games that may be watched by players. Players may willingly watch these by clicking on the Game Trailers section within the app. Ads include games such as Pudding Monsters, and can be closed at any point (e.g. they do not need to be watched to completion).

Video advertisements are also presented in between some levels – they are full-screen and cannot be manually closed until they are completed. These include ads for apps such as Cooking Fever, and other children’s gaming apps. There are also static image-based advertisements that appear in between levels. These can be manually closed. Between certain levels, the app also presents players the opportunity to ‘watch a cartoon and get 50 coins’ – these are not advertisements, but rather, cartoons of Om Nom’s character (and can also be manually closed at any point in time). However, ads appear at the completion of various levels in the form of a small banner that appears along the bottom of the screen. It can be ignored, and the apps advertised here change with time. For instance, the app Battle Camp was advertised, followed by Nymgo: VoIP Calls. The advert simply has the name of the app, as well as the phrase ‘Get it now!’.