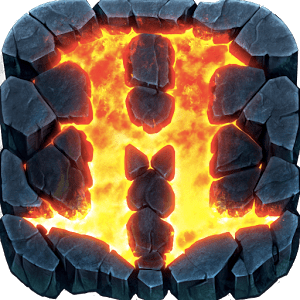 This review of Deck Heroes was completed by the Australian Council on Children and the Media (ACCM) on 16 December 2014.

This review of Deck Heroes contains the following information:

This review focuses on levels: 1-5.

Deck Heroes is an RPG card-playing app that takes place within a fantasy medieval world of creatures and heroes. The objective is to battle for survival by assembling, evolving and enhancing hundreds of creature and hero cards, each with distinct abilities, powers and levels of health. There are limited skills needed, but an understanding of strategy and problem solving may be useful.

When the app begins, players are instructed to select a character – there is a well-dressed man on the left hand side, wearing a long-sleeved shirt and leather armour; as well as an attractive blonde-haired woman on the right hand side, who is wearing a very low-cut blouse that also displays her midriff. After confirming their selection, players are instructed to travel to the Explorer’s Gate, as the Creator’s emissary is waiting for them. The screen contains a large map with multiple locations on it (such as the Bazaar, Colosseum, Secret Region, etc). After clicking on, and arriving at, the Mysterious Ruins, players are told that they must battle another attractive woman. She is also scantily dressed in minimal clothing, whilst wearing small amounts of what appear to be battle armour. Players engage in ‘battle’ by clicking on cards with certain levels of health and attack. The cards are then visibly seen to flip as they attack, and the opponent’s cards appear to take damage (this is seen as the cards bleed droplets of blood, additionally shuddering and having their numeric health value decrease with each hit). Once an opponent’s card is defeated, it disappears from view. When the ‘rage gauge’ is full, the player’s central card will release a very powerful attack – this takes time before recharging. At the end of a battle, players are met with a pop-up screen stating ‘You win!’, as well as measures of how much gold and experience they have gained. Upon winning a battle, players obtain a ‘new creature’ in the form of another card. Creatures unlock new skills when they reach level 5 and 10.

Players gradually find out more about the storyline through the text – there are four factions of different species that are at war with one another. In the missions, players are questioned as to whether they ‘are seeking death’, and instructed to ‘fight without fear!’ as they head into battle. Players are also told that strategic placement of their creatures is key to victory, in regards to paying attention to the amount of health each creature has left, and their amount of fighting capacity.

The app contains a ‘Live Chat’ button – once clicked, this takes players to an internet browser where they may submit an ‘Issue’. This appears to be to assist with technical support issues, as opposed to communicating with other online members. However, it is also possible to fight with other players online within similar battles.

‘Tapjoy’ is a feature within the app that allows players to earn in-game currency via watching advertisements for existing apps and games. Different numbers of gems are offered for different videos. In addition to this, some request that players download other apps and reach a certain set level within the game, before being able to earn a considerable number of gems.

The female character who players act as through the game is very stereotypically attractive – she is blonde, has large breasts, and is wearing what appears to be tight leather clothing. She is displaying part of her midriff. The other female characters are presented in very similar lights, and are seen to be wearing very little clothing and are posed in quite sexually provocative stances. Male characters appear to be presented as strong, authoritative and are consistently fully clothed in heavy-looking armour.