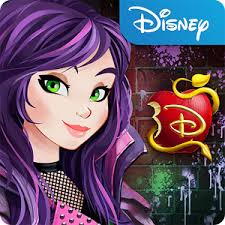 This review of Descendants was completed by the Australian Council on Children and the Media (ACCM) on 16 June 2016.

This review of Descendants contains the following information:

This app was reviewed for a minimum of 60 minutes.

The aim of this game is for the player to create their own Descendant avatar and to attend the Auradon Prep with Mal, Evie, Carlos, Jay and friends. Throughout the game, the player is required to dress their character and complete magical missions to unlock new outfits, locations, objects and rewards in order to grow their Legendary status.

A wifi connection is required to download the app.  Once it has loaded the player is required to enter their age. The player is then able to create their character by choosing from male or female gender, and then altering the appearance with a range of different features and clothing styles.

To begin the game, the player is prompted with on screen buttons to press in order for the game to progress. The first instruction told to the player is a welcome message explaining that their character is attending “Auradon Prep, where Legends are made!”, which helps to identify the overall aim of the game to the player. The player is introduced to multiple characters throughout the game and is given step by step instructions on how to complete missions and quests to become a Legend.

Continuously throughout the game as the main character meets and talks with new friends, they are given the option of how to respond in situations and choose a reply for their character to say. For example, when meeting Mal, she asks “Need something?”, the main character is given different options to reply with in order to demonstrate their personality or to gain more information. The options shown on screen in this certain scenario are: “Ben said you offered to show me around?”, “Hey, you’re Maleficent’s daughter!” or “Uh… (gulp), Never mind.”

As the game continues, the player must follow the on screen prompts, conversations and instructions shown by other characters while also collecting coins, gems, etc., within the game to become of “Legend” status at their avatar school.

The player can choose to either play the game as a male or female character.  Their choice of gender alters their choices in outfits and hairstyles.

The language and certain words may be difficult for children aged 4-8 years. Also, using the keyboard and recognising the screen prompts may be a little challenging for children who are below the age of 9 years old.

Parents of players must be sure to track what their child is clicking within the game as they may choose to buy an in app purchase without permission which will be charged to their account.