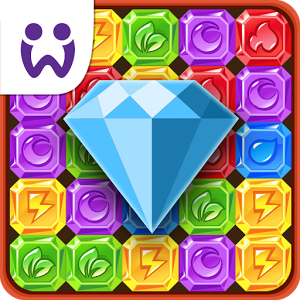 This review of Diamond Dash was completed by the Australian Council on Children and the Media (ACCM) on 24 February 2014.

This review of Diamond Dash contains the following information:

In this matching puzzle game, the player must click on three or more adjoining jewels of the same colour to score maximum points in 60 seconds.

In this game, players start with an allocation of gold bars, coins and 5 lives. The player must click on a cluster of three or more adjoining gems of the same colour. The clicked on gems are cleared from the puzzle. The time allowed for each game is limited to 60 seconds – a clock ticks in the background and ticks faster as the time limit approaches. Players are rewarded for making moves quickly and bonus diamonds may appear. When the time is up, the points are calculated for which coins and stars are awarded. Stars accumulate to move the player up levels. There are many levels. When the player achieves a new level, they receive a gold bar and a bonus percentage which is applied to their score at the end of each game. The bonus percentage increases as levels increase. Helpful “magical powers”, like Mystic Bombs, are unlocked at various points of the games – some are free, more can be bought with coins. For every game that is played, a life is used.  When players run out of lives, they can wait a specified time for more lives (a new life is added every few minutes), use gold bars to get more or ask a friend for more lives via Facebook. If the player has insufficient gold bars, they can purchase more.

On several occasions, after having run out of lives, the reviewer was presented with an easy question about the game to answer. On answering it correctly, a “prize” was offered of 5 free lives and 45 gold bars. On clicking to collect this prize, a screen was presented which required the player to enter either credit card or Paypal details, claimed to be for “verification purposes” and that the player “will not be charged”.

A possible learning benefit could be that the player must scan the puzzle quickly to look for the biggest blocks of same coloured gems and react quickly when bonus diamonds and other special features appear.

Coins and gold bars can be purchased for A$3.40 to A$203. Players are regularly presented with special offers, some of which are only for a limited time and others which are the player’s “only chance” to purchase. The iTunes and Google Play stores advise that players can “disable in app purchases on your device if you don’t want to use this feature”.  Purchasing in Facebook games can be by debit card, credit card, Paypal and Facebook gift card. There is also the option to charge smaller purchases to a mobile phone account, however the purchase price is higher using this method as a significant fee is added. The mobile phone purchase transaction screen states “Customers under age 18 must have account holder's permission”. A text message is sent to the mobile number entered to confirm payment.  Parents should be aware that if they enter credit card details, the player can make more than one purchase. On making a credit card purchase, players are advised that “Facebook will save your payment information for future purchases. You can always remove or manage this information in your account settings.”

Players are prompted to invite their friends. When the player runs the game in Facebook, the app receives their basic information and email address. A leader board is shown, which displays the player’s first name, surname, profile picture and rank against their Facebook friends. When players run out of lives, they are given the option of asking friends for more lives via Facebook.

At level 8, the player is offered a prize wheel, on which they can have one free spin per day. Prizes include gold bars, coins, lives and magical powers features. The player can buy more spins with gold bars. If the player spins five times, they will win the Jackpot which is unlimited lives for half an hour.

Players are invited to play other games by the same developer. Parents should be aware that games played in Facebook may have a panel at one side of the screen which has several sponsored links, effectively ads. These could be for products (e.g. posters) and other games (which may include war games).

One of the ads which appeared at the side of the screen was for a “Sexy MMORPG” (Massively Multiplayer Online Role Playing Game). It contained a cartoon style drawing of a voluptuous woman in a skimpy outfit.

The puzzle matching aspects of this game is not of concern. The presence of a spin to win wheel, where in game currency can be used to purchase additional spins to win random prizes is considered simulated gambling content.

Violence and scary material: None found in the game. However one of the ads which appeared at the side of the screen was for a vampires and werewolves game – if the link was clicked, the resulting screen contained a potentially scary image of a werewolf and vampire.