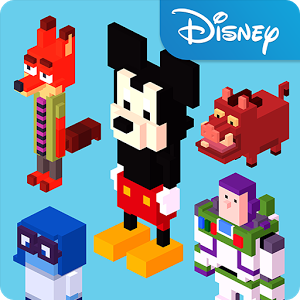 This review of Disney Crossy Road was completed by the Australian Council on Children and the Media (ACCM) on 25 April 2016.

This review of Disney Crossy Road contains the following information:

This app was reviewed for approximately 1 hour

Disney Crossy Road is an arcade style 2.5D platforming app. The central objective is to advance forward across a level, and collect coins which are exchangeable for random prizes. The skills involved in playing this app include motor skills and good reflexes.

When the app is first installed, players are encouraged to sign in via a Google Plus account. It is necessary to do this in order to progress to gameplay. A logo for the developer Hipster Whale is then shown, and an IAP disclaimer is displayed on the screen which allows players to enter their age. At the same time, text is displayed which informs the player that in-app purchases costing real money are available within the game. Players are instructed that if desired, these can be disabled in the mobile device settings.

Upon acceptance of this, players are immediately presented with a chance machine and prompted to press a button to ‘unlock a character’.  Players are then immediately placed into a 2.5-dimensional world. They are shown instructions which indicate that in-game character movement is controlled by swiping the screen in a particular direction. Players are tasked with moving forward, and traffic can be seen moving across several roads. If the player is in the way of one of the vehicles, they are squashed and the player has to restart the section.

The first time a player is crushed, they are given a “free gift”. Once the player has accrued 100 in game currency, they are given the option “Win a prize” and are taken back to the in-game chance machine, where 100 currency is exchanged for a chance at a new unlockable character. Using a different character means that players are can access a different level (which appears stylistically different, although gameplay is the identical). If the player presses the Store button, they can access purchasable in-game characters. These range in price from $1.29 for “Classic” characters, to $6.51 for “Legendary” characters.

At several points during gameplay, players are presented with a mid-screen banner advertisement – this must be manually closed. If this ad is clicked, players are taken to a Disney app store with a wide range of free apps. In other instances after failing a play-through, the player is presented with an option in the middle of the screen that states “Earn C”. This takes the player to an advertisement for another app (e.g. Words Crush, Empire: Four Kingdoms, The Secret Society – with some animated violence/battle sequences shown). Upon viewing the entire advertisement, the player is rewarded with a small amount of in-game currency. Other times, upon failing a level, a pop-up to purchase a new character appears on the middle of the screen.

The level design is heavily inspired by various different Disney franchises, with imagery/characters from The Lion King, Tangled, and Big Hero Six all being presented.

Yes: Characters can be purchased in game ranging from $1.29 for a Classic Character, to $6.51 for a Legendary Character.

When the app is first installed, players are asked to connect via a Google Play and Google+ accounts.

There is an in-game random chance machine in which players can insert 100 earned currency for a chance at a random character. This is the only way to unlock new characters, and the only use for in game currency. It is therefore a central component of gameplay.

Frequently within the game, players are prompted to watch advertisements to earn in-game currency. This appears to be the primary method of collecting currency in-game, as it far outweighs the earning potential of actual gameplay. The advertisements presented appear to be for games directed at a same age range. Advertisements are full-screen videos, and must be manually closed by players. Additionally, at the conclusion of each video, players are provided with the option of downloading the new app.

The gambling components with the app, which are central to gameplay, may be of concern. The excessive use of advertisements may also pose a risk to younger players.