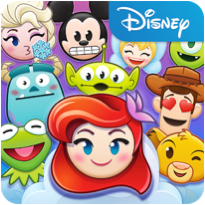 A matching puzzle game. ACCM does not recommend this app due to unrestricted in-app purchases and advertising

This review of Disney Emoji Blitz was completed by the Australian Council on Children and the Media (ACCM) on 13 December 2016.

This review of Disney Emoji Blitz contains the following information:

Disney Emoji Blitz is listed on ACCM's Children and Gambling Watch List. Disney Emoji Blitz is a puzzle game where the player must match together different Disney characters by swiping them in a row, this resembles an adult gaming machine.  The player is shown a board full of different Disney characters’ faces. The aim of the game is to match three or more of the same character together in a row. The player does this by swiping the characters, in any direction, around the board. If the player gets 3 or more of the same character in a row, the characters disappear and are replaced with new characters. When the player gets a match, they are rewarded with coins and points.

Disney Emoji Blitz is puzzle game which has strong connections to simulated gambling in both design and game play. The player has a time limit to try and match as many characters as possible before the game ends. The game is played on an interface, with accompanying sound effects, that represents an adult gaming machine. There is also a Free Spin option where prizes to assist game play (gems, coins etc.) can be won. The player can use the coins that they win to buy more characters or special character abilities (such as extra time). It costs one life to play each game, and the player can buy more lives with gems (see In App Purchasing for more detail). By gaining a certain amount of coins the player can win a special Disney character emoji that they can use on their device’s keyboard.  Each character has a special power that can help with the game. For example, Ariel can clear away some character faces with bubbles.

Disney Emoji Blitz has regular updates and content is changed regularly (often in line with events such as Halloween, Valentine’s Day), it is advised that these updates are reviewed regularly.

Disney Emoji Blitz is a game designed to interest younger children, however due to the ease of in-app purchasing, simulated gambling and the inability to turn this feature off, ACCM does not recommended this app.

In the game, the player can use gems to buy extra lives or more coins. The player can spend real money to buy more gems. The prices range from $1.99 to $99.99. There is no pin or barrier to prevent young children from making purchases. When the player clicks the ‘buy’ button it asks, “Are you sure?” and if they click yes their account will be charged. In-app purchases and updates are often targeted to the time of year and special events e.g. Halloween and Valentine's Day.

The app asks for your age when setting up (to determine which advertisements to show you). The player can also link their Facebook account to the app to play against their Facebook friends but this option is only given to children who have declared that they are 13+.

Disney Emoji Blitz is puzzle game which has strong connections to simulated gambling in both design and game play. The player has a time limit to try and match as many characters as possible before the game ends. The game is played on an interface, with accompanying sound effects, that represents an adult gaming machine. There is also a Free Spin option where prizes to assist game play (gems, coins etc.) can be won.

The app is associated with the Disney Franchise. The player occasionally has the option to watch a video advertisement to receive more gems or coins. These advertisements are typically for other app games, but they are tailored to the player based on the age they provided. They are presented as 30-second videos, which can’t, be skipped. At the end of the video the player can click “learn more” and this will take them to the product’s website.

Invitations to purchase more lives, gems or coins to gain extra time to assist in achieving the tasks to progress to next level.

Free lives are given after a certain amount of time (there is a timer indicating how long until a new life will be acquired).