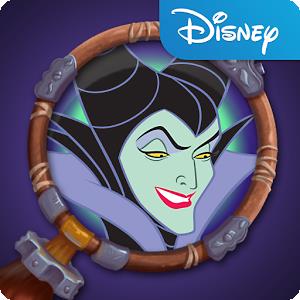 Disney Hidden Worlds is an exploration and adventure app which allows players to learn about the stories of their favourite Disney films.

This review of Disney Hidden Worlds was completed by the Australian Council on Children and the Media (ACCM) on 22 June 2014.

This review of Disney Hidden Worlds contains the following information:

This review focuses on levels 1-15.

Disney Hidden Worlds is an adventure scene-based game where players are given the opportunity to explore and recreate the story worlds of Beauty and the Beast, Tangled, Aladdin, The Little Mermaid and other classics. The objective is to play through quests within each of the worlds, and locate the hidden items within each scene presented. The skills required to play are predominantly visual and attention to detail.

When the app is opened, a message appears informing users that ‘Disney Hidden Worlds is free for everyone to play. However, you will have the opportunity to make purchases with real money to speed progress on your Disney adventure. You can disable In-App Purchases in the settings menu on your device.’

Players are then asked for their date of birth, and are given the option to login via Facebook. They are greeted by a thin, attractive female character named Chrona – she has dark brown hair, large eyes, a very thin waist and large breasts. She welcomes players to ‘Inkspire’, the world that they are now visiting. She also introduces players to the Inklings, who are ‘little rascals’ who have the power to craft anything they wish. Chrona states that ‘Here, we use the power of imagination to bring Disney stories to life. In order to create, you must first be inspired and it starts with examining even the smallest details in great works of art. Examine each object in this scene carefully, and I know you’ll start to get inspired’. Players are transported to a scene from a Disney feature film, and are given a list of objects to find within the scene (e.g. boots, broom, etc). They may use their fingers to swipe the screen and view another area, or to zoom in and view an area more closely. It is also possible to receive a ‘hint’ every 20 seconds, in which players may click on a magnifying glass in the top left-hand corner and be shown where a particular object is. Players must find all the objects listed (either by name, or by viewing a small portion of the object as a picture) before completing the level.

There are three Disney kingdoms in the game – Tangled, Aladdin, and Beauty and the Beast. Upon visiting one of these kingdoms, Chrona offers players some background information on the Disney tale associated with it (e.g. upon visiting Beauty and the Beast, Chrona tells players that she has ‘always had a soft spot for Belle; her father was an inventor, just like me!’. Players are then informed that Belle appears to be stuck at the very beginning of her Disney tale, and Chrona suggests players explore closer to determine what has happened. A pop-up screen appears with a quest listed (‘Investigate the Cottage: Go to Belle’s Cottage and select the Morning Scene’), as well as the rewards and experience points that will be gained as a result of completing it. After players locate and click on all of the necessary items, a pop-up screen appears which presents a final score, the experience gained, as well as any additional rewards such as potions, paper sheets, etc.

It is also possible for players to help craft items using Chrona’s old recipe book. To create a basket, for example, players require paper, Belle Blue, and Red Ink. Each object will utilise paper and the ink, but the object needed will change each time. Crafting objects helps fix the story and repair the kingdom, as does finding and collecting missing items. When players complete the objects set out, they are told that they are ‘on their way to mastering the scene’, and may earn reward items such as a Paper House. Players will also receive Chain Bonuses, Time Bonuses and Skill Bonuses, which all add to their final score when completing a scene. They may also repeat a scene multiple times if they wish – this will earn them additional experience points.

Players are eventually introduced to the legless, whispy black creature that broke the kingdom – he doesn’t have a name, and questions Chrona as to why he exists and who created him in the first place. He informs players that ‘If all I need is imagination to get a body, I’ll get it myself.’ It is then discovered that one of the Inklings created this villain as a result of Chrona wishing she could have an adventure.

The app also has a message centre, where players may log in via Facebook and recruit their friends. It is possible to log in via Google+ also, and to additionally add random players from browsing through a list of player usernames and IDs. Players may send their friends gifts or personal messages.

The app does not pose any overt risks to children, and aside from risks associated with in-app purchase, it may provide a fun way of practicing visual skills and attention to detail.

The app has a message centre, where players may log in via Facebook and recruit their friends. It is possible to log in via Google+ also, and to additionally add random players from browsing through a list of player usernames and IDs. Players may send their friends gifts or personal messages.

Chrona, the central character within this app, is a young and attractive female. She has dark brown hair, large eyes, a very thin waist and large breasts. Her character is not sexualised within the actual plot of the story, however.