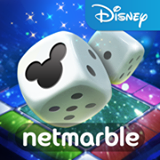 Disney magical Dice is a mobile board game, with the aim of acquiring property. Caution:in app purchases, advertising, online interactivity

This review of Disney Magical Dice was completed by the Australian Council on Children and the Media (ACCM) on 31 May 2016.

This review of Disney Magical Dice contains the following information:

The game was played whilst in the tutorial mode and also in the Rookie and Minor level, using the Mickey and Friends board over one week.

Disney Magical Dice is an international mobile board game where players adopt a Disney avatar.  The aim of the game is to acquire the most amount of property to win.  Average to high levels of literacy and problem solving skills are required to play this game.

Initially, a player is guided to select a Disney avatar.  A player chooses from either the Rookie, Minor or Major level.  A level can be selected depending on the number of games won, with successive wins affording a player a more complicated level.  A player must choose between 2 boards, either Fantasyland or Mickey and Friends.  Next, a player chooses to play against one other player or up to 3 other players, individually or as a team.  Located at the bottom right hand side of the screen is the costume card information, a player’s nickname, the amount of coins owned and the total assets obtained.  After one player selects a fortune card, a player is randomly selected to take their first turn.  A player uses the dice control meter to tap, hold and release the roll button to roll the dice.  If a player rolls two of the same numbers, they are allowed to roll another time.  If three doubles in a row are rolled a player is immediately sent to the Jail House.  When landing in the Jail House a player misses 3 turns.  To escape the Jail House a player is required to either pay a coin fee or roll a double.  If a player does not take their turn in a given time the game is automatically set to auto-play mode.

After rolling the dice, a player moves forward the number of squares rolled.  A player can next choose to buy a square and place buildings on the square.  Four types of buildings can be purchased, including Villas, Buildings, Hotels and Landmarks.  If an opponent lands on a players square, the player collects a service fee.  A service fee varies and is dependent on the type of building present and whether an opponent owns all of the same coloured squares.  Alternatively, a player can acquire squares from opponents by paying double the Build Fee (squares with Landmarks cannot be acquired).

Every time a player completes a lap of the board, coins are paid.  This varies depending on the level being played.  Extra coins can also be acquired when hosting a Town festival on a specific square owned by a player, riding the fast trolley, triple colour completion, line completion, magic square completion and also when winning a penalty shoot-out at the Arcade.  Gold coins and ranking points are acquired as a result.  However, coins can also be lost as a result of drawing a specific Fortune Card if and when landing on this square.  There are over 10 Fortune Cards, each with varying instructions.

Rewards can be claimed regularly via the mailbox as daily bonuses every time a player reaches a new ranking.  A variety of rewards can be used during play to advantage a player.

Yes: It is possible to purchase in game currency of extra coins and diamonds with real money.  Purchasing a level up package requires a player to enter payment details.  The player can choose between using credit card details, Optus billing, PayPal or a redeem code.  Other one-time only packages where products can be purchased are also available.  Prices start from AUD $7.99 and range to AUD $46.99.  These can buy premium costumes for the avatar, hearts and gold coins to position a player’s success and ranking.

No advertising material is seen during play.  Game promotions are sent to a player’s mailbox and game and reward alerts are received often via mobile.

The Disney avatars display gender stereotypes however no sexual references were found during review.

No game playing behaviour which may be of concern to parents was found during this reveiw.