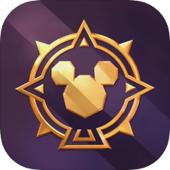 Disney Sorcerer’s Arena is a role-playing game that involves battling an opponent team to win battles. The player manages a team of familiar Disney characters and pits them against the ‘baddies’ team. Basic motor and reading skills and some strategic thinking required. Not suitable under 10; parental guidance to 15 (in-app purchasing, on-line access, texting, clubs with other on-line players and reward-based video advertising).

This review of Disney Sorcerer’s Arena was completed by the Australian Council on Children and the Media (ACCM) on 12 June 2020.

This review of Disney Sorcerer’s Arena contains the following information:

The game was played for over 6 hours, however, the reviewer did not enter any of the Club options or the Summoner’s Challenge. The reviewer reached level 13.

Disney Sorcerer’s Arena is a PvP (player versus player) RPG (role playing game) that involves battling an opponent team to win battles and ultimately campaigns. The game utilises Disney characters with which the player builds a small team to battle a computer-generated opponent team or a friend or club member. It uses a variety of colourful backdrops and mild cartoon violence when battling. The player chooses actions for each character by touching an icon and the battle is won by the team that first wipes out the other. As the game progresses the player earns more sophisticated actions for each character and also gains new characters with which to fight. 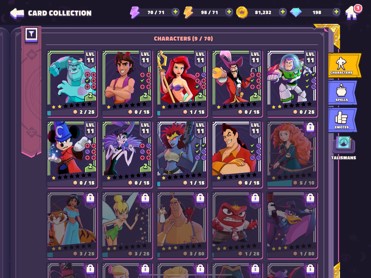 The game relies on colourful artwork, looped character behaviour and situation videos, and brassy melodic stings to keep the energy up and a sense of exuberant activity. Some strategy is required for this game though it really doesn’t come into play until level 12 or so. Players will need to read reasonably competently as there are a lot of rewards, equipment and currency that need to be understood and managed if they wish to be successful.

Disney Sorcerer’s Arena has quite a few different forms of currency which can be confusing initially and, as the game progresses, the player earns access to new battle quests and new characters with which to build their team. Notably, however, the reviewer did not need to purchase any currency or boosts to reach level 13, though running out of ‘energy’ will result in having to wait some time to further access the quests.

Much of the play time is taken up with upgrading the characters and their equipment and managing rewards, coins and potions. This was a bit frustrating as the purpose of each item and the equipment was not very clear and seemed to be automatically managed by the game.

Parents should be aware that links are available that take the player to other websites without requiring passwords (see Online Information) and can access video advertising through the ‘store’. 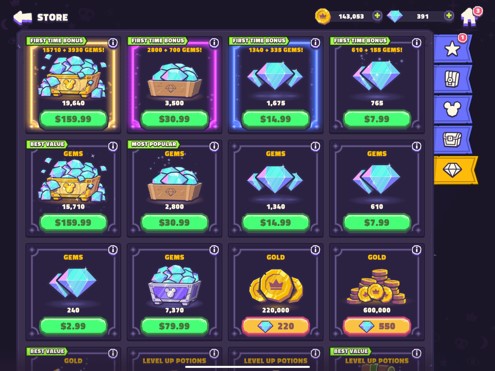 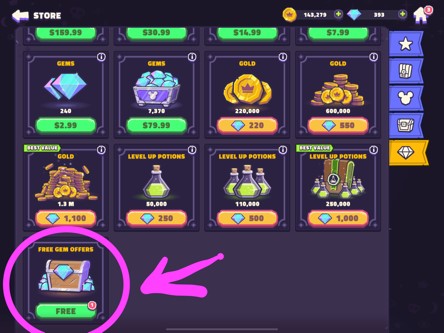 Just a reminder to parents that the player can link to outside sites that do advertise and present gambling style activities.

This game is a battle game and so there are displays of combative behaviour and mild violence, however, there are no explicitly disturbing results from the violence, with the characters fainting when eliminated.