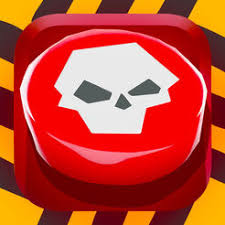 This app is a continual advancement game, where players simply aim to upgrade their underground bunker to earn the most amount of money possible. Not recommended for children 12 years and under, parental guidance for children 13 – 17 years for saturation of inappropriate ads.

This review of Doomsday Clicker was completed by the Australian Council on Children and the Media (ACCM) on 19 July 2018.

This review of Doomsday Clicker contains the following information:

Doomsday Clicker is set in a post-apocalyptic world where the player manipulates the world to gain domination and wealth. The game begins with encouraging the player to hit the doomsday button – which detonates a nuclear bomb. The player then has a series of underground bunkers which accumulate money through consistent upgrades of rooms. Each upgrade raises that room’s earning capacity – which automatically (and continually) generates money – and contributes to the total. For example, the Hobby room earns 15.76 Quintillion dollars every 5 secs. Upgrades are simply achieved by pressing the corresponding room’s money button. As more money is earned, the player can unlock different landscapes and accumulate humans and mutants to increase earning capacity.

As noted above, this game has a lot of features which encourage players to watch ads for other games, these include: the multiplier (multiplies your earnings over a certain time period), returning to the game (notifies you how much you earned whilst away and offers to double it if you watch an ad), a robot/drone that offers multiplication of earnings. These ads were mostly for other war or violent games. One particular ad is activated when you kill a monster on the surface – this is an ad for a violent game which features zombies and involves graphic killing. Upon researching this ad, it was discovered that it had a 17+ rating (noting that Doomsday Clicker has a developer rating set at 9+, many parents would not be comfortable with this. Gold bars are also earned through the game; which are used to buy creatures in the space station (which you can then send to Earth and help you earn more money). There’s a feature in the game where you can receive free gold bars if you download other games and reach certain milestones in them. For example, if you download and complete the 3rd level of Coin Master, you receive 1,056 gold bars. Coin Master is a cartoonish looking game which features a slot machine. This game also offers benefits by connecting to Facebook.

Many ads throughout which feature war and violence – some being age inappropriate.

There’s some crude language and humour through the soundtrack. For example, a line from one of the songs: “Have you pushed the button yet? Murder without feeling has never been so appealing. It’s probably ok, the world is ruined anyway”.