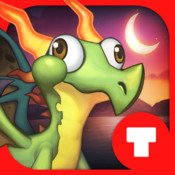 This review of Dragon Friends was completed by the Australian Council on Children and the Media (ACCM) on 5 August 2014.

This review of Dragon Friends contains the following information:

Dragon Friends is a click and drag game where the player must build and run a farm style magical island full of dragons.

When the game begins the player is given an empty island. A tutorial shows them how to buy and build buildings such as houses, and how to grow vegetables to sell. Eventually dragons will begin to appear on your island and the player is instructed how to breed them to make more dragons (see Gender Stereotypes and Sexual references)

The characters on the island give the player tasks to complete. Such tasks might include managing the farm, planting crops or breading and feeding the animals. Each completed task is rewarded with love hearts, money or gems. These items can then be used to buy other items in the game or upgrade your current items. The player can also buy gems with real money (see In App Purchasing). When the player is given a task it will specify how much time it will take, what it will cost and what they will be rewarded. Some of the tasks can take a long period of time.

Some of the tasks involve visiting neighbouring islands and offering to help them with their building. Some of these islands belong to fictional characters but others belong to real online players (see Online Information)

This game can be beneficial for developing a child’s planning and time management skills.  The player must way up the costs and benefits of each task to determine the best use of their resources. The time restraints on the tasks help develop patience and the ability to design your own island can foster creativity.

An element of this game is to connect with your friends and help each other with their islands. The player also has the option of adding ‘friends’ who they do not know, and using a profile picture of themselves. The player can chose not to be involved with these elements of online sharing. However, they will receive rewards, such as gems or coins, if they do.

The game connects to OpenFeint if you are playing on an android or Game Centre if you are playing on an apple product.  These platforms are online communities where you can share your scores and connect to your Facebook page. However, you can choose to restrict OpenFeint or Game Centre on your device. The player also has a chance to win extra dragons when they like the app on Facebook.

In level ten, the player is asked to rebuild an old ship. Once the ship is rebuilt the player has access to a wheel of fortune which offers them various prizes for spinning. The player is allowed one free spin per day but they can pay 2 gems for extra spins.

A large aspect of the game is mating animals together. Each island has a mating station, where the player must mate different breeds of dragons together to create new breeds. Doing this will give the player rewards. The gender of the animals is not specified therefore the player can chose any two animals of the same species to mate. After the two animals are chosen they are placed in the mating station and then lots of love hearts and rainbows appear.

The presence of a 'spin to win' wheel, where in game currency can be used to purchase additional spins to win random prizes is considered simulated gambling content. This feature is not an integral part of game play.

Violence and Scary Material : In the introduction of the game the characters explain that an evil witch put a curse on their land which forced the dragons to go into hiding. However, during the game play the witch is not seen and hardly ever mentioned.

While some dragons have scary powers such as breathing fire, they are portrayed in the game as nice friendly creatures that use their fire power for activities such as baking pies.