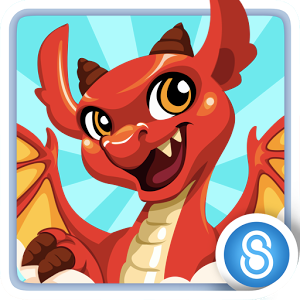 Dragon Story is a quest and timer dragon breeding game.

This review of Dragon Story was completed by the Australian Council on Children and the Media (ACCM) on 24 September 2015.

This review of Dragon Story contains the following information:

This app was reviewed up to level 10.

Dragon Story is a timer and quest app based around animated dragons. The objective of the game is to grow, care for, and breed a wide variety of dragons together in an effort to obtain a many different hybrids. There are limited skills needed, but motor skills and creative thinking may prove useful.

When the app is installed and opened, players are met by a well-dressed female character who introduces herself as the Dragon Mother. She informs players, who are acting as the Caretaker, that it is their role to restore the Dragon Isles by filling them with dragons once more. Players are then taken to a top-down view of a grassy field, where they are asked to tap on a small nest icon to add a Fire Dragon Egg to the nest. A Fire Dragon costs 100 silver coins to purchase, and earns 70 coins per hour in return. Players are able to read some information on the rarity of the dragon, as well as a brief description of the dragon’s physical characteristics. Players must then build a habitat for the dragon before it hatches – this involves entering the ‘Market Store’ and buying some rocks and greenery for the dragon to reside in. For example, purchasing Red Rocks for 200 silver coins will allow two dragons to have a home, and they are described as ‘warm pillows to a sleeping Red Dragon’. After making this purchase, players can choose a specific location for the habitat. Players are then able to either hatch the dragon and place them into the newly built habitat, or sell the dragon for extra coins.

Once the dragon is placed, players must take care of it and ensure that it has adequate food. To do this, they need to purchase some plants that will produce food (and thus level-up each dragon). Players are able to ‘rush’ the process of planting or building habitats, by using gold bars. This allows players to skip waiting periods. When dragons earn players silver coins, individuals must tap on the small coins icon above the dragons head to collect these.

There are many different types of dragons that can be bought and raised. Dragons must also share a colour with the habitat they live – thus, Forest Dragons require a Green Grove to live in. When players feed and care for their dragon, they level-up and eventually can be ‘Evolved’ into something else. At level 5, players can also breed pairs of dragons to form new breeds of dragons entirely. This is another way to obtain new dragons, in addition to buying eggs from the Market.

At level 30 (as described in the app’s instructional notes), players receive access to the Battle Arena where they can face their own dragons off against other dragons. Each dragon type has different strengths and weaknesses in combat, and the rarer or higher-level a dragon is, the stronger it is. In order to fight, players must tap on the Battle Arena icon – their dragon will be on the left-hand side, and the opposing dragon will be on the right. From here, there are attack buttons, and players must tap to attack and thus reduce the health of the opposing dragon. Losing a match will exhaust a player’s dragon, rendering it unable to evolve, breed, trade or quest for a brief period of time.

The more dragons and habitats players build, the more a player will level-up and unlock additional items to utilise within the Dragon Isles. Players can access their Island Goals book, which offers players quests and objectives to complete – this includes things such as ‘Spice up the island with two colourful Flower Beds’.

Players can share achievements about their builds over Facebook, and are encouraged to do this each time players level-up in the game. The app also contains a Social tab which allows players to invite others to join as ‘Friends’ – in order to do this, players must create a free Storm8 ID.

Players can additionally visit neighbouring habitats created by other players, which they are encouraged to do via a coin incentive. From here, players are able to post a message on the other individual’s wall, send gold bars to these friends/neighbours, and play with their dragons. All of these actions increases the Social ranking of players, and makes it more likely that they will be visited by other players in return.

The app contains occasional pop-up advertisements – these are full-screen static advertisements on other gaming apps, such as Jewel Mania (a match-three game). No inappropriate ad content was viewed during the review of this app.