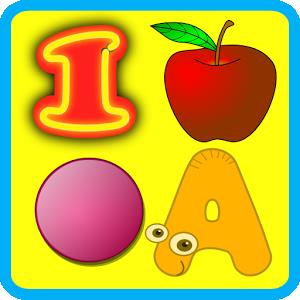 An interactive app for toddlers and young children that covers a range of educational categories such as Letters, Numbers, Months of the Year, etc.

This review of Educational Games For Kids was completed by the Australian Council on Children and the Media (ACCM) on 4 August 2014.

This review of Educational Games For Kids contains the following information:

There are no levels within the app, but each of the nine categories was played through to completion.

This is an interactive touch-based app for young children, allowing them to explore nine different educational categories. Players are encouraged to learn how to visually recognise and memorise the speech sounds associated with numbers, letters, species of animals, etc. There is no objective in this app, other than to work through all of the examples within each of the categories. This game encourages the practicing of fine motor skills (for example, tapping and swiping the screen), as well as visual interpretation and labelling.

Upon clicking on the Letters option, children are shown a screen containing a picture of an apple, the word ‘apple’ beneath it, and the letter ‘A’ – an adult male voiceover vocalises the letter ‘A’ also. Players may tap on the screen in order to hear the letter spoken aloud again, or slide from right to left to scroll through the rest of the letters within the alphabet and their associated images (for instance, ‘B’ shows an image of a ball, while ‘C’ shows a cat). From this screen, it is possible to click on left and right arrows instead of swiping across, and there is a small menu that allows you to individually choose particular letters to display.

This format is the same across the other sections within the app. For instance, the Numbers section allows players to scroll through a list of numbers (1 to 20), tapping the screen to hear their individual name read aloud by the voiceover. The Colours section goes through a range of colours, listing twelve different ones and providing a solid square of colour for each example. There are eleven shapes offered within the Shapes section (e.g. square, oval, hexagon, heart, arrow), twelve months within the Months category, seven days of the week within the Weeks section, nineteen varieties of fruit (including blackberry, cucumber, tomato, cherry), twenty species of animals (including cat, bear, lamb, wolf, jaguar), and twenty five body parts with associated pictures (e.g. nose, hair, leg, toe, shoulders).

It is possible to access another menu by clicking on the device option button – this allows players to click on the following options: For Parents, More Apps, Rate Us 5, and Games. Within the ‘For Parents’ section, the app presents parents with the statement ‘Here you could find tips for better sleeping, relaxation and breathing’. The options offered are then broken down into various links, including: ‘play active role in children education’, ‘develop your baby’s brain’ and ‘encourage child to love learning’. Each of these takes parents to the corresponding WikiHow page with information regarding each subject matter.

Within the ‘More Apps’ menu option, players are taken to the Google Play store where there is an extensive list of other apps (both educational and game-based) created by the same producers, Zodinplex. Players also have the option of rating the app out of 5 stars. In regards to the final option, clicking on ‘Games’ takes players to a website which lists a range of different apps, additionally giving players the option to search for ‘top apps and offers’.

This app has many potential educational benefits for young children, helping to reinforce learning through repetition and engaging animations, as well as offering a broad range of categories for children to explore. Each category has a substantial number of examples, thus improving the likelihood that players will remain interested in following through with regular practice.

There is a banner advertisement along the bottom of the menu screen – it advertises for external apps, listing ads such as ‘Kill the Black Birds’ for kids, as well as apps related to managing home loans directed towards parents. There are also advertisements for other apps hidden within this app. For instance, within the Letters segment, the floating image of a cow’s head (only semi visible) appears along the very bottom of the screen in a subtle banner-like advertisement. Tapping this takes you to the Google Play Store’s page for another children’s app (for example, ‘Hay Day’). Upon trying to close and exit the app, players are also offered a brief pop-up which asks them if they would ‘Like more free apps?’. The ‘Yes!’ option is in large text and bright colours, whereas the ‘Not now’ option is small and partially greyed out.

No game playing behaviours of concern to parents were found during the review.