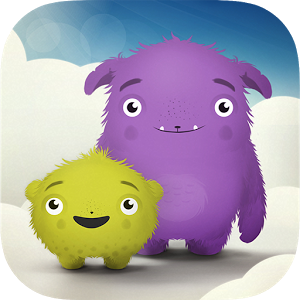 This review of Emlings HD was completed by the Australian Council on Children and the Media (ACCM) on 2 October 2014.

This review of Emlings HD contains the following information:

The entire app was played for this review.

Emlings is an educational app for children aged 4 and over, based around the McDonalds franchise. The objective of the game is for players to rescue Emlings from The Nada, and watch the unique Emlings make the world a more creative place once they are free. The skills required to play this app are memory, dynamic visual acuity, and fine motor skills.

The app opens to a screen displaying a variety of McDonalds products and small fictional furred creatures called Emlings. The app then loads to a cloudy scene with a variety of different coloured Emlings. Dark clouds and grey creatures then appear and begin to eat the white clouds, and then the Emlings are seen hiding in a cartoonish representation of a suburban environment.

There is a simple login screen that allows different individuals to play on the same device, an option to "see intro" and a "parents" section. The parent’s section begins by asking parents to adjust an analogue clock to a specific time (a test which children are unlikely to be able to do). Once this is completed, parents can access two options: "Manage play time" and "About the Emlings app". Manage play time allows the parent to control how long their child can play with the app in one sitting, and then how long the "rest period" after that lasts until the child can play again. The app also offers information explaining the maximum suggested time for children of different ages to access technology in a day. The ‘About the app’ section contains information about the app itself, and describes that it has been developed as a ‘fun digital experience for kids aged four to eight that encourages creative play whilst also developing their cognitive skills’. This section lists important features of the app:

The information section also states that the activities within the app do not include ‘repetitive, arcade style play’, instead taking the form of ‘creative, open ended tools where kids can make their own digital creations’. This section also provides some basic information on the story of the app, stating that Emlings are hidden in the world that has been invaded by creatures called ‘The Nada’. The objective of the game is for players to rescue Emlings from The Nada, and watch the unique Emlings make the world a more creative place once they are free.

During the central gameplay of the app, the players are shown a collection of their Emlings of different shapes and colours. Once one is tapped, players are given the choice of engaging in one of four activities with that particular Emling. These include the following:

A dancing activity. This involves tapping circular buttons around the screen as they appear which, once pressed, make the emling perform different dance maneuvers. There is upbeat music playing in the background during this. Once users play through a dance, they are met with a pop-up sign stating ‘Well Done!’ and a picture of their Emling. Once the dancing section is completed once, the player can customise a group dance with a large number of their collected Emlings.

A drawing activity. This involves using the accelerometer controls of the device to guide the Emling around a shape, popping balloons to progress through the task. There are lines so that players see that they have drawn an object. Once the task is completed once, players can access the second mode of the drawing activity, where they can make their own drawings, placing balloons and changing the colour freely.

A shape-filling activity. This involves taking a measure of a clay-like substance, and filling in a shape with it by stretching to fit the corners of the shape before gauges on each corner of the shape run out. Once this task is complete, players can make their own shapes by adding spots and stretching the substance between them.

A singing activity. This involves seeing a sequence of differently coloured notes produced, and then stretching the Emling’s mouth to reproduce those notes in the correct sequence. Once this task is completed, players can make their own song using the stretching method with multiple Emlings.

Once these four tasks have been completed, players have the option to ‘release’ the Emling through an open chute in the gameplay environment. Doing so shows an animation of the Emling being fired out of a cannon and back into the clouds, completing the objective of the game.

Although the game has no in-app purchases, and can be played without purchasing items from McDonalds, there are special features involving McDonalds purchases. Special Emlings can be found by scanning the Emlings trigger on a happy meal box within McDonalds stores. However, the app encourages healthier meal choices by offering special Emling gifts that can only be obtained by scanning special stickers on healthy food items from McDonalds. In this sense, portions of the app still promote the purchase of McDonalds products, although it appears to be done in a socially responsible manner.

McDonalds product placement is used extremely frequently in this app, with all of the meal components of a happy meal being seen very regularly, and the McDonalds happy meal mascot visible in every single loading screen within the app.