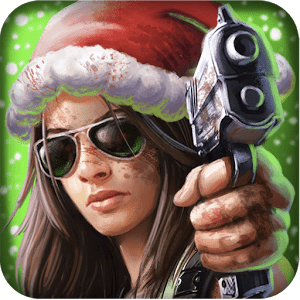 This review of Empire Z was completed by the Australian Council on Children and the Media (ACCM) on 16 December 2014.

This review of Empire Z contains the following information:

Empire Z is a quest-and-timer based app that centres on the concept of defending against an infected race. The objective of the game is to construct buildings and structures that will contribute to the running and defence systems of the city. There are limited skills needed, but an understanding of strategy and problem solving may be useful.

The app opens to a loading screen containing an image of four people (two male and two female) standing on top of a car whilst they point large machine guns at the crowd of zombies below. After this, players are met by a character named Sarah – she is a blonde woman who wears an extremely tight-fitting, low cut shirt. She is seen to be either facing the camera directly as she shows a considerable amount of cleavage, or turned around so that her behind can be seen whilst she wears tight-fitting blue jeans. The text on the screen reads ‘Welcome Commander! I am your advisor, Sarah. It is my job to teach you the ins and outs of running your Empire. The first thing we need to do is rebuild our city. You will need resources to build. A great way to earn resources is by completing missions’.

Players are then brought to a large map screen that contains numerous settings and options along the border. There is an arrow that points users in the direction of the mission they are meant to undertake. They are instructed to build a farm first, as ‘food is an important resource to keep the troops fed’. In order to complete this, players may tap on an empty square within the map, and click on the Farm option to begin building. The app displays the costs for building, as well as build requirements, rewards gained after building is complete, and a brief description of the architecture itself. It is possible to allow the structure to be built within a certain time frame (e.g. 1 minute, up to many hours – this time period is set by the game for each building), or to skip this waiting period by using in-game currency. This takes the form of Gold Bars.

After the farm is built, players are told that it is possible to build a myriad of structures that are useful for upgrading the cities defences, as well as raising an army. These buildings include things such as a research lab, foreign embassy, cloning centre, infected pen, and general housing. Within each of these various builds, it is possible for players to add further details – for instance, within the research lab, players may elect to research topics such as Combat, Defences, or Economics. Within each of these three categories, the app contains level-locked sub-topics to research.

The edge of the central map screen contains many small icons, including the amount of resources that have been produced by the various buildings created. The resources include food, lumber, metal, oil and coin. It is possible to level up your character by building more structures and obtaining more resources.

There is an additional feature within the app that allows players to engage in Solo Events or Alliance Events. For instance, there is a Casino Solo Event that involves ‘spinning the casino to earn points’. This involves tapping ‘Spin’ in the centre of a square-shaped selection of rewards – the selection wheel goes around through each item and lands on a random one (e.g. gold, oil, lumber, etc). It is possible to enter the ‘high stakes room’, but it is necessary to purchase a specific gold pack with real-life money in order to access it. These events also contain rankings of all players that have participated in them, so that players may compare their ‘total points’ with other individuals who have played the game. It is possible to apply to be part of an Alliance with these various members – some Alliances are full (e.g. have 100 members already), whilst others still have free spaces.

The app also contains a feature called the VIP section – this involves merely tapping the VIP button ‘every day to build a VIP streak’. The higher the streak, the more points are obtained each day.

It is possible to obtain ‘free’ gold bars if players ‘Like’ the app on social networking websites, such as Facebook. It is also possible for players to join Alliances that are comprised of other users across the world, in addition to viewing the ranking boards which compare individuals against others who also play the app.

As stated in the review comments, there is a Casino Solo Event that involves ‘spinning the casino to earn points’. This involves tapping ‘Spin’ in the centre of a square-shaped selection of rewards – the selection wheel goes around through each item and lands on a random one (e.g. gold, oil, lumber, etc). It is possible to enter the ‘high stakes room’, but it is necessary to purchase a specific gold pack with real-life money in order to access it.

It is possible to obtain ‘free’ gold bars if players watch video advertisements of other gaming apps. Each video offers a different number of rewards/gold bars in return.

Players are met by a character named Sarah at the beginning of the app – who is presented in a sexualised manner.

The extensive in-app purchasing and time-lag features exist in this app.