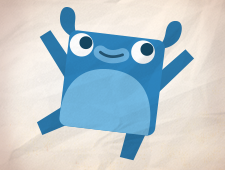 This review of Endless Alphabet was completed by the Australian Council on Children and the Media (ACCM) on 5 November 2015.

This review of Endless Alphabet contains the following information:

This app was played and reviewed to completion.

Endless Alphabet is a reading/vocabulary game where individuals play through various activities centred on individual words. The objective of the game is to listen to a word be pronounced, then to arrange letters in an appropriate order to spell the word, and subsequently listen to a definition of the word. The skills required include motor skills to utilise the app, as well as basic spelling skills.

When the app is opened, players are shown a brief introductory animation of many small and colourful creatures running across the screen. Players are then taken to a menu containing the entire alphabet listed along the top of the screen, and a window below showcasing graphics with words and an associated image. The letters A, B and C are highlighted and can be clicked on, whilst letters D to Z cannot be viewed – when players press one of these letters, a pop up window appears asking them to ‘Unlock all words! Get access to all words, puzzles and animations’ by making an in-app purchase of $7.49.

For the first three letters of the alphabet, there are 7 activities/words for players to work through. The letter A contains options to learn words such as ‘Alarm’. When players tap on the word, they are taken to another screen where the word is printed in large text, and a female voice pronounces it aloud. Players are then shown a stencil of the word, and are required to move the individual letters surrounding it onto their correct place. These letters are also read aloud when they are placed correctly over the letter templates. There is then a subsequent animation showing a visual representation of the word, along with a definition. For example, the word ‘Alarm’ shows an animation where a small creature is awaken from their sleeping state by the sound of a loud ringing bell. The female voice then states that ‘An alarm is a loud sound that tells you to do something’. Players can then elect to go back to the home menu, or to go directly to the next word by clicking on a small arrow in the bottom right-hand corner of the screen. The other words included are ‘Artistic’, ‘Bellow’, ‘Celebrate’, ‘Contraption’, ‘Cooperate’, and ‘Courage’.

There is a small ‘I’ button in the top left-hand corner of the screen. If players click on this, a pop-up appears stating ‘Grown-Ups only! To access, please enter the following numbers: Two. Six. One.’, with a keypad to type in the numbers in digit form. This takes players to an Information for Parents Screen, where they can ‘like’ the creator’s company on Facebook, follow the company’s official Twitter page, and Tell A Friend about the app via social media.

The app contains an in-app purchase option which enables players to unlock the complete version of the game, thus having access to activities from the whole alphabet (as opposed to merely the letters A, B and C. This costs $7.49 to unlock.

There is an Information for Parents Screen, where players have the options to like the creator’s company on Facebook, follow the company’s official Twitter page, and Tell A Friend about the app via social media.